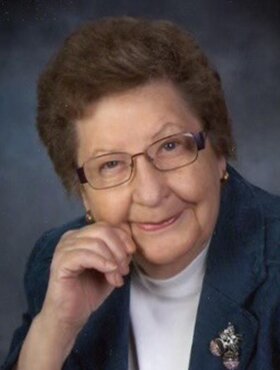 Colleen was born in Medicine Hat, AB, on August 27, 1936. She joined the RCAF and was stationed in Lachine, QC, in 1955 where she met and married Gordon. Over the next few years, they had three beautiful children, Ron, Debbie, and Tammy. Together they experienced a 25+ year career in the Armed Forces that included postings such as Edmonton, Ottawa, and Lahr, Germany. Upon Gordon’s retirement from the Military in 1973 they moved to Calgary, AB, to be closer to Colleen’s family and have been here ever since.

Colleen was a member of the Royal Canadian Legion Ladies Auxiliary for twenty years, filling many positions during that time. Over the years she has lent her talents of piano playing to many situations and events at such places as Hillcrest Extendicare, Bethany Care Center, and George Boyack Nursing Home, where she brought smiles and joy to the residents and patients.

In her journey of faith, she was a confirmed member of the Anglican Church of Canada and has served with many parishes over the years in the capacity of Sunday School teacher, organist, and Bible Study Leader. More recently, Colleen and Gordon were members of the Good Shephard Moravian Church. After Gordon’s passing, Colleen moved to the Boardwalk Seniors Residence where she has enjoyed living for the past 10 years. Here she shared her gift of music with leading Hymn Sing and Jam Sessions. Guiding the weekly Bible Study was also a great love of hers.

The annual Christmas sing-a-longs with her family and friends will be fondly remembered by all. Colleen was also an avid knitter and there are many happy recipients of her projects, such as her Cowichan Sweaters.

Colleen was predeceased by her husband of 56 years Gordon Chapman, her son Ronald Chapman, her brother-in-law Joseph Larmond, as well as her parents Dora Kirk and Ralph Louden.

Funeral Services will be held at Holy Trinity Anglican Church (18 Hidden Creek Road N.W., Calgary, AB), on Friday, September 2, 2022, at 1:00 p.m., followed by refreshments and a Graveside Service at Queen’s Park Cemetery (3219 – 4th Street NW, Calgary, AB). Family and friends who are unable to attend in person are invited to join Mrs. Chapman’s service streamed live. Please click on the following link, https://www.facebook.com/htaccalgary, and click on the “Live” tab to view the live stream a few moments before the start time of service. Condolences, memories, and photos may be shared and viewed here.

Share Your Memory of
Colleen
Upload Your Memory View All Memories
Be the first to upload a memory!
Share A Memory
Send Flowers