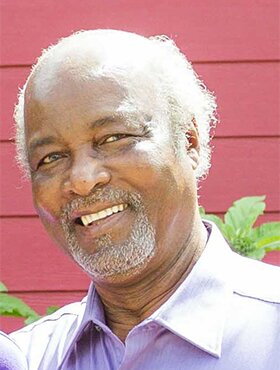 Maurice Hendrickson was a native of Nevis, W.I., a beautiful island in the Caribbean.  He grew up in a busy household which included his uncle Elis, aunt Alice, and three cousins Ana, Marjorie, Millicent, and his two brothers John and Raynard. Maurice also shared a close bond with his third brother Franklin.  He often spoke about the many memorable experiences he shared with his brothers and cousins growing up in Nevis.

Upon graduating from high school, Maurice, was encouraged to become a teacher and his passion for learning and education eventually led him to Canada in 1966 on a scholarship to the University of Calgary. There he obtained a Bachelor of Arts degree in Geography with distinction. Maurice then returned to Nevis after graduating in 1970 and joined the staff of the Charlestown secondary school. It was there he met his future wife, Julienne Woodley.  In 1973 Maurice and Julienne married and later that year they celebrated the arrival of twin sons, Gaston, and Gavin.  In 1976, Maurice, Julienne and family returned to Canada and the University of Calgary.  Two years later in 1978, Maurice and Julienne celebrated the birth of their third son Greer, and the completion of Maurice’s Master’s degree with honours in economic geography.  In 1979 Maurice and Julienne returned to the Caribbean and settled in Antigua where they lived and taught high school until 1981, at which time they chose to return to Canada and pursue opportunities there.  Upon returning to Canada, Maurice and Julienne chose to make Calgary, AB their home.

Maurice was a good athlete and enjoyed sports such as cricket and soccer.  He was a great swimmer and was proud that he had the opportunity teach all his children to swim in the ocean. Maurice was a very kind-hearted, soft spoken, gentle human being, who was known for being a true gentleman. He will be remembered as a patient and loving person who always had great words of wisdom to share with those who needed them. Maurice will be most remembered for his positive outlook on life even in the darkest moments.  He could often be heard quietly laughing and joking with friends and family resulting in much needed smiles or laughter.

Maurice is survived by his three sons, Gaston, Gavin, and Greer Hendrickson; along with five grandchildren, Elianna, Talia, Nevis, Nyah and Ruben, all of whom he was extremely proud of.  He is also survived by his two brothers, Franklin and Raynard Hendrickson and their families; and numerous nieces, nephews, cousins, and friends.  Maurice was predeceased by his loving wife Julienne Hendrickson, his parents George and Una Hendrickson; and eldest brother John Hendrickson.  He will be deeply missed by all those whose lives he’s touched.

Funeral Services will be held at St. Peter’s Anglican Church (903 – 75th Avenue S.W., Calgary, AB) on Thursday, September 8, 2022, at 1:00 p.m. Reception to follow at the church. Family and friends who are unable to attend in person are invited to join Maurice's service streamed live on the day of the service (see below). For those who are unable to view live, a recording of the service will be posted. Condolences, memories, and photos can also be shared and viewed here.

Share Your Memory of
Maurice
Upload Your Memory View All Memories
Be the first to upload a memory!
Share A Memory
Send Flowers