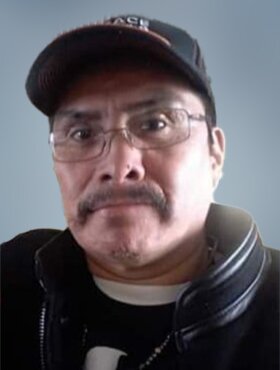 It is with deep sadness we announce the sudden loss of our beloved Eddy on Tuesday, August 30, 2022, at the age 54 years.

He worked in the carpentry field here in Siksika. Our Eddy was an avid Fastball player. He loved and lived for the family sport each summer in his younger years. He also enjoyed playing basketball and various sports. He was well known for his humour and easy-going personality. Eddy got along with all those he met; he easily made friends, laughing, joking and always teasing. Our Eddy had a contagious smile, that made you laugh and forget about getting upset with him, for his mischievous ways. Our Eddy was also known as Mr. Ed or “Crazy”.

Eddy was dedicated to his brothers. He was the youngest child of his family. Eddy acknowledged his family and was close and dear to the Medicine Traveller, Red Crow, Yellow Fly, Healy, White Elk, and Backfat families and always addressed them as Sis or Brother, never by their names. Our Eddy also loved his many nieces and nephews. Lately, we would see him with his niece Megan along with nieces, Jonie and DeeDee. He was also instrumental in the upbringing of his niece Chantelle’s children, Rolanda, RJ, Kelly, Dwayne, Roland, and Chanel. Eddy was married to Karen Yellow Fly, openly accepted her children. You would see our Eddy with his brother Alvin, as they were very close and always hung around together.

Eddy is survived by his brothers, Barry, Alvin, Trent (Girlie), and Curtis; sisters-in-law, Michele Yellow Fly and Joyce Royal; as well as numerous nieces and nephews. He is also survived by Uncle Clifford (Melvina) Healy; Aunts Millie Little Light, Marie Healy, Veronica Smith; and relations from the Siksika and Blood Nations. Eddy is also survived by his friend Leanne McMaster.

The family appreciates and grateful for the tremendous support for all prayers, donations, kindness and words of encouragement from friends, relatives and Chief & Council. Health protocol for Covid 19 will be followed as set by local Alberta Health Regulations.

Wake Services will be held at the Residence of Alvin Yellow Fly (Siksika Nation) on Friday, September 2, 2022 at 6:00 p.m.

Funeral Services will be held at The Church of Jesus Christ of Latter-day Saints (150 9 Avenue, Gleichen, AB) on Saturday, September 3, 2022 at 1:00 p.m. Graveside Service to follow at Canon Stockton Cemetery (Siksika Nation, AB).  Condolences, memories, and photos may be shared and viewed here.

Share Your Memory of
Eddy
Upload Your Memory View All Memories
Be the first to upload a memory!
Share A Memory
Send Flowers