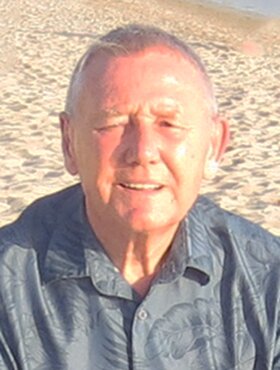 Mel Lowe, beloved husband of Joan Lowe, of Lethbridge, AB, passed away on Wednesday, August 31, 2022, peacefully with family at his side, at the age of 77 years.

Mel was born in Stoke-On-Trent, England, on July 9, 1945. He emigrated from England to Canada in September 1976 with his family. He moved to Fernie, BC, where he resided for the next 24 years, then residing in Lethbridge, AB, for the last 22 years.

Mel married Joan in September 1964. He was a journeyman electrician for most of his life until retiring in 2011. He was an influential part of growing the Fernie Youth Soccer Program for years, acting as President for much of his time. Mel loved to fish and had a passion for music and golf.

Besides his loving wife, Mel is survived by his two sons and two daughters-in-law, Steve and Anita Lowe of Coleman, AB, and Gavin and Tracy Lowe of Calgary, AB; as well as his grandchildren, Clorissa, Alec and Jane Lowe, and Jayden Hollomay-Genaille. Mel was predeceased by his Parents, Dorothy and Norman Lowe, of England. Condolences, memories, and photos may be shared with Mel’s family here.

Share Your Memory of
Melvyn
Upload Your Memory View All Memories
Be the first to upload a memory!
Share A Memory
Send Flowers