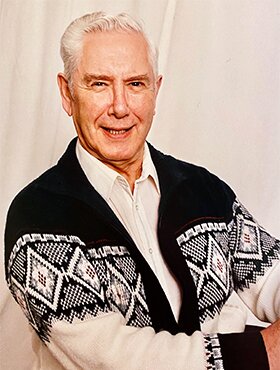 John E. Klaassen, beloved husband of Ruth Klaassen (nee Dirks), of Calgary, AB, passed away at home, on Friday, September 2, 2022 at the age of 92 years.

John was born in Rosthern, SK on October 25, 1929. He grew up on the farm and was surrounded by family and many cousins. He loved singing in the choir and playing baseball. He graduated from Rosthern Junior College and Rosthern Bible School, where he met Olga. They were married in Black Creek Mennonite Brethren Church, Black Creek, BC on July 27, 1952. Their son Benjamin was born June 11, 1953. He had his first teaching job in Woodchuck teaching grades seven to twelve, and then went on to teach math and sciences in Aylsham and Carrot River.

In 1964 John and Olga felt a calling to do Missionary work with Congo Inland Mission where they faithfully served until Olga passed away in 1976. In 1977 John married Ruth Dirks, and together in BC they raised their family: John, Shirley, April, and Miriam.

Besides his loving wife, Ruth, John is survived by his two sons and daughters-in-law Ben and Donna Klaassen, and John and Cheryl Dirks; two daughters and son-in-law, April and Peter Brown and Miriam Klaassen. He is also survived by his adored grandchildren.

John loved his Lord and served him faithfully, sending many prayers for family, friends and acquaintances.

Memorial Services will be held at McInnis & Holloway (Fish Creek, 14441 Bannister Road SE, Calgary, AB) on Saturday, October 8, 2022 at 10:00 a.m. Reception to follow in the Hospitality Centre at the Funeral Home. Condolences, memories, and photos may be shared and viewed here. If friends so desire, memorial tributes may be made directly to the Africa Inter-Mennonite Mission Inc.(AIMM) (www.aimmint.org).

If friends so desire, memorial tributes may be made directly to the Africa Inter-Mennonite Mission Inc.(AIMM) (www.aimmint.org).