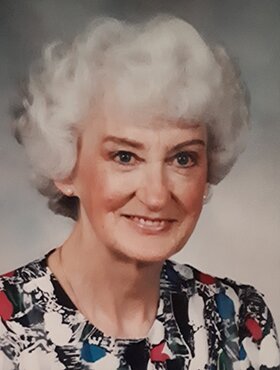 Iola (Jean) Georgine Chugg (née McBean), passed away peacefully on Friday, September 2, 2022 at the age of 93.

Jean was born in Calgary, AB on June 15, 1929. She grew up around Stobart, AB with her parents, George and Velma (née Sanders) McBean, and siblings, Leona, Lloyd and Noreen. She attended Hammerhill and Gleichen schools continuing to Cluny for grade nine to eleven. Independent and self-sufficient, Jean left home in grade eleven and moved to Calgary to start a new life. She took a room at the YWCA and worked at Hudson’s Bay. Jean also enrolled in and graduated from Henderson Business College.

At the age of nineteen, she met the love of her life, Glenn Chugg from Fort MacLeod. After only eight dates, with Glenn traveling between Calgary and Fort MacLeod, dodging the YWCA curfew hours, they got engaged. They married on March 16, 1949 in Calgary, and lived in Fort MacLeod, then Lethbridge and finally Calgary where in 1955, they built their dream home in Haysboro and raised their two sons, Cal and Lloyd. Jean and Glenn lived in Haysboro until 2021 and were married for 72 years.

Jean was an active member of the community and a dedicated volunteer with a myriad of local and international organizations. She and Glenn loved dancing and traveling - as she liked to say, they went everywhere except India and Africa. She was known for her exceptional petite point, for countless other types of needle work, her teddy bears and numerous arts and crafts. Jean was famous for her magnificent Christmas trees hung with hundreds of decorations that she had collected over the years. She was a consummate bridge player; her gardens were breathtaking, and she baked the most delicious cinnamon buns and ginger cookies.

Jean was an inspiration and a constant to her family. Through their early years to adulthood, she remained involved with her children and grandchildren. She never missed a special occasion, and supported them through the rain or shine in the stands at all their many varied sporting events. Jean was a loving wife, mother, grandmother, great-grandmother, sister, aunt, and steadfast friend.

Jean is survived by her son Cal (Karen); her grandchildren, Phil (Anna), Victoria (Ian), and Jocelyn (Trevor); her great-grandchildren, Sally, Jack, Roger, Arthur, and Isabelle, all of Calgary; her brother Lloyd (Jo); her sister-in-law Georgie Cuell; as well as numerous nieces, nephews, and dear friends, Karyn (John) and Connie (Gary) Leidal.  She was predeceased by her husband Glenn, youngest son Lloyd, and sisters, Leona and Noreen.

A Funeral Service will be held at McInnis & Holloway (Park Memorial, 5008 Elbow Drive SW, Calgary, AB) on Saturday, September 17, 2022 at 2:00 p.m. Reception to follow in the Hospitality Centre at the Funeral Home. Condolences, memories, and photos can also be shared and viewed here.

If friends so desire, memorial tributes may be made in Jean’s memory to the charity of your choice.

The family thanks all the wonderful, and supportive staff at the South Health Campus Hospital, Unit 68.

Share Your Memory of
Iola
Upload Your Memory View All Memories
Be the first to upload a memory!
Share A Memory