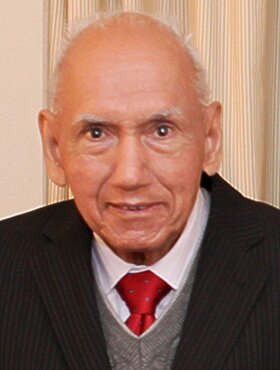 Peacefully, on Sunday, September 4, 2022, Jagjit Singh Gill passed away in Calgary, AB, at the age of 89 years.

He is survived by his wife of 57 years, Amarjit; his daughters, Rani (Raj Aujla) and Vinni (Scott Farlinger); his son, Ranbir (Randeep Gill); grandchildren, Manpreet and Raman Aujla, Simran and Roop Farlinger, and Amar and Amrit Gill; sisters, Harjit Kaler and Gurjeet Bath; and his nieces, nephews, extended family and friends in both Canada and India. Jagjit was predeceased by his parents Rood Singh and Gurnam Kaur Gill; and his sister Manjit Bath.

Jagjit was born in Kuala Lumpur, Malaysia where his early years were spent happily attending school and playing sports. When war broke out, he was separated from his mother and sister, who were able to return to India, while he and his father lived under the harsh conditions of the Japanese occupation of Malaysia. Eventually, when he was a teen, the family was reunited in India. Although he rarely spoke of this difficult time and what he had to endure, it influenced Dad's perspective on life immeasurably. He never complained of life's hardships, and always tried to keep a positive outlook. He was a kind and gentle soul, unfailingly honest, and would always try to help settle a dispute.

From India, Dad travelled to the UK and studied law at Lincolns Inn. Shortly after that, he and Amarjit were married, and set out for Canada in the late 1960s. They landed in Vancouver and eventually settled in Winnipeg, where they raised their family while he worked as a lawyer. And oh, how he embraced Winnipeg and all it had to offer. Many family outings were spent at Assiniboine Park, the Centennial (Millenium) library, the Forks, and many other sites about town.

Dad was one of the first Punjabi lawyers in Winnipeg, and practiced there for over 35 years, many from his office in the Canada Building on Donald Street. He was a fixture downtown, always impeccably dressed in a suit and tie, no matter the weather. Dad was generous with his time and knowledge, and volunteered for over 30 years with the International Centre of Winnipeg, providing Punjabi/English translation services to those in need.

Like his father before him, Dad was an adventurous type. He loved to travel, and his curiosity drove him to have many adventures. As kids we were always amazed at how well-travelled he was. Whenever we would be working on a school geography assignment, our first stop was always to ask Dad if he had been there. Throughout his life he took many trips back home to India, the last one at the age of 85. Once he and Mom moved to Calgary, they enjoyed holidays to Vancouver and back to Winnipeg to visit family and old friends.

Dad was a skilled badminton, field hockey, and cricket player, and played on teams in both Malaysia and England. Even well into his 50s and 60s, he would kick a soccer ball around if given the chance. Dad loved entertainment, in particular Indian films and music. He could often be heard convincing the family to attend one function or another where there would be Indian music and food. He happily danced at all three of his children’s weddings.

He was a pious man, a devout follower of the Sikh faith. In their early days in Winnipeg, the Sikh population was very small, yet Mom and Dad found and connected with other Indian families, and a community was born. Sundays were spent attending Gurdwara services, first held in a small apartment, then in the dedicated Gurdwaras that were built as the community grew. Dad’s faith never left him, and he attended Gurdwara often, for as long as he was able.

An avid reader, Dad instilled the love of a good story in his children. Once he became a Nanaji / Dadaji, his calm and kind demeanour was further appreciated as he read to the children and showed such an interest in whatever they were doing. He always encouraged us in our academic pursuits as well as our sporting interests, quietly reading our school papers and attending our soccer games and track meets.

Dad was a simple man, perhaps happiest having a good conversation and a cup of chai. We are lucky to have shared in his life’s journey and to have learned from him. He was dearly loved and will be missed immensely by his family.

Share Your Memory of
Jagjit
Upload Your Memory View All Memories
Be the first to upload a memory!
Share A Memory