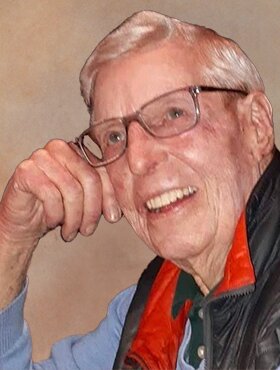 Joseph Stewart Irwin III, born in Calgary, AB on leap year day, February 29, 1932, passed away peacefully on Sunday, September 4, 2022, at age 90 years. Joe, as he was affectionally known, lived a full and rich life and predeceased by his dear wife of 55 years, Jean Louise Clow Irwin in 2008.

Joe was the third of four Irwin children, born to Carrie Mae Mitchell Irwin from West Texas, and Joseph Stewart Irwin II from Missouri, an American couple who had moved their family to Alberta following the oil business during early days of the depression. Joe’s father aka “Daddy Joe” was a hardworking, well-traveled geologist, and his mother Carrie Mae, a larger-than-life Southern belle homemaker with a strong constitution, sharp wit and as Joe would attest, the best cornbread recipe of all time. His older brother, Mitchell and sisters, Aileen (Shier) and Carol (Grant) rounded out the Irwin clan that grew up mostly in the Elbow Park neighborhood. Spending time on athletic endeavors at the new Glencoe Club, where Joe was a lifetime member, and heading into the Canadian Rockies, where Joe discovered the rush of alpine skiing, a major passion in his life.

Joe graduated from Central High School and followed his father’s career path in oil exploration. After acceptance to the reputable Colorado School of Mines, he headed to Colorado in fall of 1949. He captained the alpine racing team, earned his Geological Engineering degree, and best of all, fell for a gorgeous, fun-loving Pi Beta Phi at the nearby University of Colorado, Miss Jean Clow, a Denver native who also skied.  They married upon his graduation in June of 1954 and returned home to Calgary to start a career and a family. Skiing became the dominant family sport over the winters, and Joe’s commitment to alpine racing included leadership in the Calgary Ski Club followed by the Lake Louise Ski Club, getting all four of his boys onto snow in the Rockies every year. No doubt one highlight was watching his son Mike race the famed Hahnenkamm downhill in Austria in the late 1970’s, the era when the Crazy Canucks became a major force in ski racing. To that end, Joe helped convince the powers that be that Lake Louise would be a fine host mountain for World Cup downhills - starting in 1980 - a key signal that Alberta could manage a Winter Olympics. Joe was also a key fundraiser for both the Alberta and Canadian Ski Teams and is honoured in the Canadian Rockies Ski Racing Hall of Fame. Another major Irwin activity thanks to Joe was golf. First as a member of Canyon Meadows, then for the rest of his years at the Calgary Golf & Country Club, Joe introduced the game to Jeanie, his boys, and grandkids with enthusiasm. We all learned something from Joe, especially that just being together on the 19th hole was the real victory.

Professionally, Joe had an extensive career with various companies in the Alberta oil patch including Ashland Oil, Kaiser, Sceptre Resources, and others that operated internationally, leveraging their exploration in both North America and overseas. He chose to retire relatively early, giving him more time to spend with Jeanie in their San Diego area condo, and to enjoy the growing Irwin family, with all his four of his sons marrying and starting families.

Joe also took on the role of caretaker for Jeanie, as she battled an early onset of dementia for the last decade of her life. It was a true act of devotion and boundless love and spoke to the content of his character. Of major significance to Joe’s spirits in his golden years were the Irwin grandchildren. Weddings in Banff (Geoff and Jordan), Penticton (Tom and Lindsay), Calgary (Pete and Jamie) and Big Sky (Steph and Andrew) were incredibly special events for Joe, as he witnessed his family’s growth.

Without a doubt, Joe’s legacy is in the lives of these next generations. He had meaningful relationships with all of us, including Joe’s nieces and nephews from both sides of the family, and the in-laws and additions he came to know and love. We thank them all for contributing to Joe’s life. Also, while Joe has outlived many of his friends, we would like to thank the extended family of bridge club, his dear golf buddies, his fellow Mines alumni and all who made his journey what it was, a wonderful life.

Share Your Memory of
Joseph (Joe)
Upload Your Memory View All Memories
Be the first to upload a memory!
Share A Memory