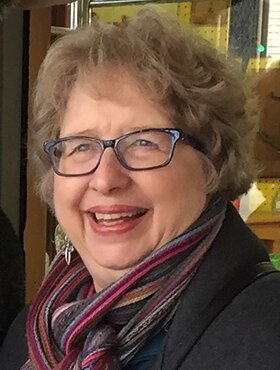 Joan Mary Kent (née Gierl) was the fifth child of Cecelia and Frank Gierl, born on a farm outside of Moose Jaw, SK, on September 7, 1945. Joan died shortly before her 77th birthday, on Sunday, September 4, 2022, in Calgary.

Joan is survived by her son and daughter-in-law, Kevin Kent and Candace Ayres of Calgary; daughter and son-in-law, Brenda Kent and Ich Diocee of Cobble Hill, BC; four grandchildren Quinn, Ellisia, Nova, and Neko; sister Rosemarie Barilla of Regina; and brother and sister-in-law, John and Anne Gierl of Spruce Grove. Joan lost her beloved husband, Terry, just over three years ago. Joan was predeceased by her two brothers, Tony Gierl and Frank (Charlotte) Gierl, and her brother-in-law, Steve Barilla.

Joan met Terry in Moose Jaw and married on August 7, 1965. Over the years, they moved to Prince Albert, Saskatoon, and finally Calgary, where they planted roots in 1984. Everywhere they lived, they created community and built strong lifelong friendships.

At Moose Jaw Technical School, Joan learned the skills to be a successful office administrator. She began her career as a secretary at CanaDay’s Apparel and established her skills and reputation over the years until her final job as office manager with Agriculture Canada, where she later retired. Joan and Terry then began the travel season of their lives, taking many cruises and tours, and making new friends all over the world: Denmark, Belgium, Germany, England, the US, Australia, and other parts of Canada.

Joan is remembered for her great sense of humour and playfulness. She loved playing games, particularly the ones that got everyone laughing. Her grandchildren will miss her joy of Christmas; from her baking, to her perogies, to her miniature Christmas village. She was a skilled seamstress, known for her Barbie clothes/tents. Joan was also a fierce advocate, volunteer, and support person for people suffering with trigeminal neuralgia. She raised her children to appreciate warming a house with good friends, good food, and laughter.

Joan was grateful for the family and friends that provided support and love during these difficult years after Terry’s death, through her cancer journey and COVID isolation. In honour of Joan’s life, memorial tributes may be made directly to the Salvation Army Agapé Hospice where Joan spent her final days.