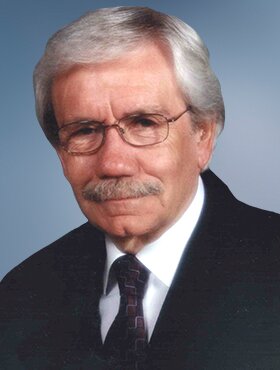 Chuck’s family sadly announces his passing at home on Thursday, September 8, 2022 at the age of 89 years, with his loving wife and three daughters by his side. Chuck was born in Lethbridge in 1933 and lived with his parents, Lloyd and Bernice, and his sister Jacqueline in a number of small Alberta towns, as his father was employed with the Alberta Wheat Pool.

In the summer of 1948, the family moved to Calgary, where Chuck attended Crescent Heights High School, Mount Royal College, and SAIT, graduating in Land Surveying and Drafting. From 1954 to 1958, he was employed by the Federal Government building the Trans-Canada highway between Banff and Lake Louise. Chuck’s long career with the City of Calgary began in 1958 in the Engineering Department. In 1965, he moved to the Planning Department, where he became Chief Planning Technician in 1970. With his outstanding leadership skills, he established a collaborative environment providing excellent service to other City departments. Chuck retired from the City of Calgary in 1991.

Chuck worked just as hard in his free time. He was a notorious “moonlighter”, including tours he led to Tijuana and Southern California, working at Thomas Jeffery Men’s Wear, bartending at Heritage Park, and weekly soup deliveries for his daughter’s store, Sunnyside Market. He was also a ski patroller, swimming instructor, lecturer in both school systems, Governor on the Board of YMCA, a weekend cowboy, and an avid fisherman.

Following retirement in 1991 from the City of Calgary, he added active membership in the Seniors Alpine Ski Club and Fox Hollow Seniors golf. When asked for a favourite travel destination, Longview was preferred, yet he thoroughly enjoyed traveling with the entire family to sunny climes; most recently he travelled to Costa Rica to celebrate his 89th birthday. Chuck’s crowning achievement during his final two years was the limited publication of his book “Chuck Nowlin, These are My Stories”, treasured by family members.

A Celebration of Chuck’s Life will be held at Hillhurst United Church (1227 Kensington Close NW) on Tuesday, September 20, 2022 at 2:00 p.m. Reception to follow in the Heritage Room at the Church. Condolences, memories, and photos can also be shared and viewed here.

If friends so desire, memorial tributes may be made directly to the YMCA Foundation, https://www.ymca.ca/get-involved/donate, or to the Hillhurst United Church, https://hillhurstunited.com/donate.

Share Your Memory of
Charles
Upload Your Memory View All Memories
Be the first to upload a memory!
Share A Memory