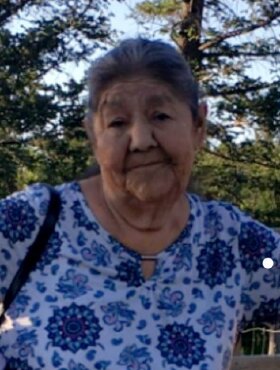 Thîkâ taô wîya was born on July 15, 1946, at Banff Indian Days. She was one of a handful of Elders that were born in a teepee. Patricia was born into the Labelle Clan on her maternal side, and the Ryder Clan on her paternal side.

Patricia attended Residential School from the age of six years old until sixteen. She was a survivor. Following some time, she started to work as a cook at the Morley School, then for numerous years with her skills, talents, and crafts, she worked at the former Chief Chiniki Handicraft Shop. While working as a cook for the Meals on Wheels program, Patsy found her passion for cooking traditional foods and was promoted to traditional caregiver, and then manager, she held that position for a number of years. For the past eight years, her final calling was as a member of the Chiniki Elders Advisory Council.

Patricia was a prominent member of the Chiniki First Nation from Mînî Thnî Stoney Nakoda Nation. She worked as a Chiniki Elder Advisor. She was actively involved in community events and gatherings as a respected Elder. Not only was she outspoken in her points of view, but she was also compassionate. Many young men and women called her Mom, Mîchun, or Kokum. Patsy would take time to listen, guide, and give profound advice. She was able to make a person(s) hopeful and reminded them, they are not alone.

Patricia cherished her four grandchildren and dedicated her life to raising them and teaching them traditional ways and values. She had a great sense of humour, she always made people laugh and always welcomed everyone into her home, she was a mother to everyone. Patsy was a pillar in the community, making crafts, cooking, sewing and was a very talented bead worker. She easily made friends with everyone she met.

Her motto was “With God, All Things Are Possible”, which she truly believed.