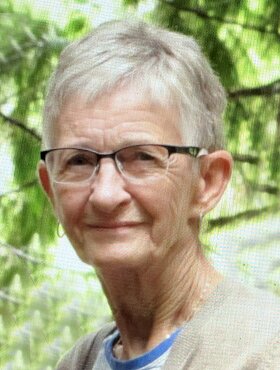 Carol was born in Kitchener, ON, on March 30, 1946. She moved to Victoria, BC, in the late ’50s with her family. Carol eventually married and had three children while living in Victoria. As a single mom, Carol moved her family to Calgary in the summer of 1981 where she lived till her death.

Carol graduated from the Alberta Vocation College with a Licenced Practical Nursing certificate. Carol worked for Carewest Glenmore Park (MSK unit) for most of her thirty-one years as a Nursing Assistant. Carol loved working at Glenmore Park and formed great friendships with fellow staff and patients. Carol was a caring and compassionate NA and felt it was a calling for her. After thirty-one years working at Carewest, she retired in 2018 at the age of 72 years old.

Carol accomplished much throughout her life and was particularly proud of all her grandchildren whom she had a hand in raising all the grandsons. Carol had a special bond with her youngest grandson Daniel and was his biggest cheerleader when it came to his soccer endeavors. she would drive him to his practices and games and attend as many tournaments as possible including local, AB, BC, and USA tournaments.

Our family would like to thank the nursing staff as well as doctors at Foothills Hospital unit 111 for their care, and the Salvation Army Agape Hospice for the care and compassion received by Carol and her family.

Funeral Services will be held at McInnis & Holloway (Deerfoot South, 12281 – 40th Street SE, Calgary, AB) on Friday, November 25, 2022, at 2:00 p.m. Reception to follow in the Hospitality Centre at the Funeral Home. Condolences, memories, and photos may be shared and viewed here.

Share Your Memory of
Carol
Upload Your Memory View All Memories
Be the first to upload a memory!
Share A Memory
Send Flowers