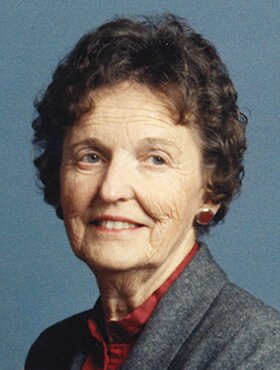 It is with heavy hearts that we announce the passing of Dorothy Helen Lindsay at the age of 95 years.

Dorothy was born at home on her parents’ farm in Formosa, ON. She was one of many children, family who she would cherish throughout her lifetime.

Dorothy met Robert (Bob), and in 1950 they were married, settling in Kitchener, ON.  In 1967, while working for Electrohome, Bob was transferred to Calgary, AB. With their four children, they moved in to the community of Haysboro. At the time, Dorothy's sister Beatrice lived in Stavely, AB. Both sisters were very grateful to be close to each other.

Settling in the community of Haysboro, Dorothy went on to meet the woman who would become her lifelong best friend, a wonderful woman also named Dorothy. The street we lived on was filled with tight knit families - and there were so many children! This time was very important to Dorothy and left her with fond memories. She was very involved with her church and in the community. She also worked outside the home, something that wasn't too common for women in that day and age.

Dorothy loved her hobbies. She was a prolific reader of nonfiction books, and she was exceptionally talented when it came to sewing, cross stitching and crocheting. She also loved to tend her garden.

Dorothy did love to travel and found a kindred spirit with husband Bob in that regard. One of her first significant trips was to Las Vegas. It was 1977 and, at the time, she worked at Silver Dollar Bowl. The owner treated his entire staff the trip. Bob joined along too, paying his own way. The seed for traveling seemed to really set in then for both of them. From that time forward, one of their goals was to travel when they retired. They indeed did that. They spent ten years in their truck and trailer traveling California, Nevada and Arizona, to name a few. When they arrived back in Canada, they spent much of their time on their lot near Kelowna, BC.

Dorothy remained very close to her siblings. Despite distance between them she remained connected to them. She especially loved going on trips with her sisters, including trips to Scotland, Ireland, Portugal, Gibraltar and Mexico. For many years, she would comment on these trips with great happiness.

Dorothy and Bob settled back in Calgary once they retired from traveling.  They spent their time enjoying family, friends and their hobbies. After Bob's passing in 2006, she continued on with her community activities, reading and beloved hobbies.

In 2018, at the tender age of 91 and still living on her own, she decided to move to a seniors’ facility. It was there that she spent the remaining years of her life.

We would like to thank the staff at Revera Evergreen and Agecare Midnapore for their exceptional care shown Dorothy.  We are forever grateful.

A private family Celebration of Life will be held for Dorothy. Condolences, memories, and photos may be shared with Dorothy’s family here.

If friends so desire, memorial tributes may be made directly to The Cystic Fibrosis Foundation of Canada, 1-800-378-2233, 2323 Yonge Street, Suite 800, Toronto, ON, M4P 2C9, https://www.cysticfibrosis.ca/. This foundation was very close to Dorothy's heart.

Share Your Memory of
Dorothy
Upload Your Memory View All Memories
Be the first to upload a memory!
Share A Memory