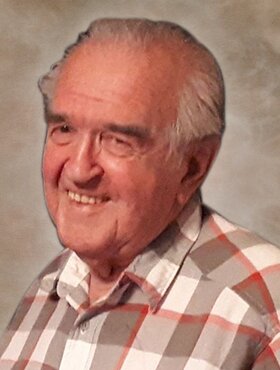 Andrew Michael Schnurr of Calgary, AB, passed away on Wednesday, November 2, 2022, at the age of 90 years.

He was born to the late Joseph and Barbara Schnurr on the family farm near Allan, Saskatchewan on April 10, 1932, with thirteen siblings: John, Joe, Helen, Kay, Agnes, Tony, Julie, Marie, Wally, Ed, Frank, Jake and Doreen.

He moved to Calgary, AB as a young adult and started his career as a meat cutter for Canada Safeway. Here, he met and married Marlene Fay Baumann on May 26, 1958 and they had three  children, Trudy Lynn, Douglas Joseph and Dawn Marie.

Andrew accomplished much through his life and was particularly proud of serving his many clients at Safeway and later worked for the City of Calgary in charge of road maintenance. Andrew retired in 1991 and moved to Creston, B.C., where he enjoyed growing fruit and vegetables on his acreage and loved the outdoors, as well as had a passion for clean eating! Andrew also, enjoyed the warm weather and going south for the winters to escape the cold.

Andrew is also survived by his siblings Julie, Marie (husband Al), Frank (wife Barb) and Doreen; and his nephew, Jim Yeast (wife Karen) who spent several years in kind friendship with Andy in Creston, B.C.; as well as numerous other nieces, nephews, cousins, and friends.