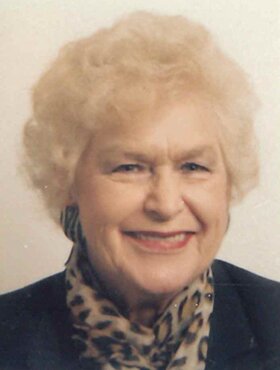 Edith Garden (nee Spence) of Calgary, AB, passed away peacefully on Friday, November 4, 2022, at the age of 96 years.

Edith was born in Drumheller, AB, on October 25, 1926, to Edith and Frank Spence. She was raised in Hillcrest, AB, and moved to Calgary when she married Jack Garden in 1947. Edith worked for Sears Canada for over forty years and enjoyed the people she worked with in the different departments.

Edith will be most remembered for her love of dancing which started at a very young age. Growing up in the Crowsnest Pass, she and her siblings attended the dances held every weekend in one or another of the surrounding towns. It was here that she met her husband Jack in 1947. Edith was a gracious and generous hostess who will also be remembered by all who were included in holiday/celebration meals throughout the years.

The Garden family would like to thank the Hillhurst West Unit staff of the Brentwood Care Centre for their care of Edith over the past few years.

Share Your Memory of
Edith
Upload Your Memory View All Memories
Be the first to upload a memory!
Share A Memory
Send Flowers