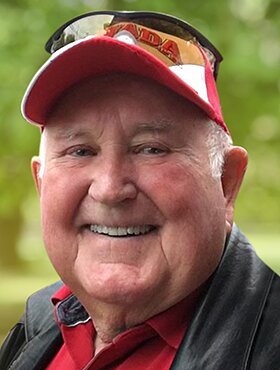 Arthur H. Jepps, a sweet and funny, “fat and sassy” man, beloved husband of Judith Jepps (nee Coyne) passed away peacefully in his home on Monday, November 7, 2022 at the age of 86 years after a tenacious battle with Pulmonary Fibrosis. At the time of his passing, he was surrounded by four of his favourite ladies.

Art was born in Redland, AB on June 28, 1936. He was the youngest of six children and came from extremely humble beginnings having been born in the middle of the great depression. He was very proud to have graduated from high school and moved to Calgary on his own, at the ripe age of 17, to make his way in life.

Art was foremost a family man with a deep love for his wife of 55 years, Judy, and his two daughters.  He was very proud of his girls and loved them deeply.

He spent many years with his family camping, traveling, playing cards, and enjoying sports such as baseball, curling, hockey, and football. He especially loved golf. He was a member of Inglewood Golf & Country Club for 30 years and traveled all over North America to play some incredible courses.

Art loved to make people laugh. He had a quick wit and a wonderful sense of humour. He was so intelligent, he loved to learn and be informed, he read the newspaper front to back every single day. He could complete a crossword puzzle in record time, he knew obscure facts and remembered trivia. We were so lucky that he kept his wits about him, right up until the end.

Art spent the majority of his career working at the Energy Resources Conservation Board; he worked there for 27 years 9 months and 4 days. Not that he was counting. He retired in 1995.

Art accomplished much throughout his life and was particularly proud of his 204 blood donations to the Canadian Red Cross and his leadership role in very successful United Way campaigns.

Besides his loving wife, Arthur is survived by his favourite older daughter, Jodi, and his favourite younger daughter, Lisa, and their “smartass” husbands, Corey and Paul. He was “Grampie” to his sweet granddogger, the bestest girl, Sophie; “Gido’ to four loving grandchildren, Abbey, Mac, Hannah, and Owen, and one smiley great grandson, Mason.

He is survived by his brother Bill (late Anne), as well as his sisters-in-law, Carol (late John), and Rosemary (late Wayne).

He was a beloved uncle to his numerous nieces and nephews, and he enjoyed many lasting friendships with co-workers and golf buddies. He will be missed by all who knew him.

If friends so desire, memorial tributes may be made directly in Art’s memory to the Canadian Pulmonary Fibrosis Foundation, Attn: Calgary Chapter (47 Squire Bakers Lane, Markham, ON L3P 3G8, Telephone (905) 294-7645, www.cpff.ca. or to the Animal Cancer Therapy Subsidization Society (ACTSS) at www.actssalberta.ca who helped save Sophie’s life back in 2013.

The family would like to thank Dr. John Chan and his team; and Susan of the Palliative Care Team for their kindness and compassionate care.

Cremation has taken place. Family and friends are invited to celebrate Art’s life at 11:00 a.m. on Friday, November 18, 2022 at Hillhurst United Church, 1227 Kensington Close N.W., Calgary, Alberta, T2N 3J6. Refreshments to follow. A private interment of remains will be held at a later date. Condolences, memories, and photos may be shared and viewed here.

In honour of Art, make someone laugh today…

Share Your Memory of
Arthur
Upload Your Memory View All Memories
Be the first to upload a memory!
Share A Memory
Send Flowers