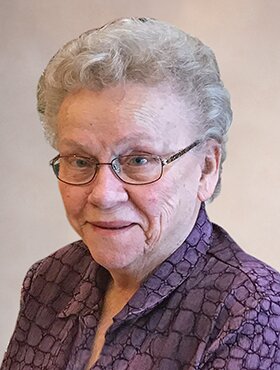 Kristin was born on Dec 4, 1936 to Thorsteinn & Lilja Kardal in Bifrost Municipality, MB.

At the tender age of 16, she married Gerard Savoie, who was serving in the Canadian Armed Forces in Gimli, MB. They moved frequently, making many friends along the way, living in Gimli, MB, MooseJaw, SK, Chatham, NB, Zwiebrucken (Germany), Greenwood, NS, Cold Lake, AB, and Fort Kent, AB. Gerry retired from the Armed Forces in 1974 and they moved to Swan Hills, AB, where they owned and operated the Esso Station there. After Gerry’s untimely passing in 1984, Kris moved to Grande Prairie, AB, where she worked for many years as a Red Seal Cook at oilfield camp.

Kris met William Gillis here and they enjoyed a wonderful retirement, living first on an acreage near Beaverlodge, AB, where they enjoyed camping, fishing, and travelling. They moved into town and stayed thirteen years in a retirement village before moving to Calgary in 2017 where there was more family to support them. Kris enjoyed crafts, cribbage, bowling, and gardening, but mostly she enjoyed being the matriarch of her large family. Kris had seven children, seventeen grandchildren, fifteen great-grandchildren, and one great-great-granddaughter. She led an interesting life, living abroad, as well as travelling the world. We will cherish her memory forever.

Many thanks to the health care professionals who have helped care for Mom in the last few years. She lived independently at Sage Hill Retirement Residence for four years, followed by one year at Cambridge Manor in Long Term Care. Special thanks to the excellent nurses and doctors at Rockyview General Hospital, Unit 94, for their care in her last few weeks, and Dr. Peter Jamieson and Dr. Friesen.

Share Your Memory of
Gudfinna
Upload Your Memory View All Memories
Be the first to upload a memory!
Share A Memory
Send Flowers