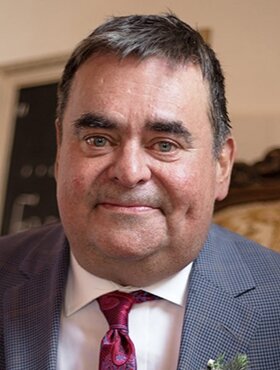 John Spaeth, beloved husband of Cheryl Spaeth (nee Williams), of Water Valley, AB, passed away on Wednesday, November 9, 2022, at the age of 61 years.

John is survived by his loving wife Cheryl, and his two sons, Jonathan (Marysol), and Thomas (Fern). John loved being an Opa to Jericho, Mia, and Cheryl’s eight grandchildren. Additionally, John is survived by his siblings, Ellen Metzinger (Jeff), Anita McWilliams (Al), and David Spaeth. John was a beloved uncle to Nicole, Amanda, Ryan, Lyndsey, Sydney, and great-uncle to Layla. John is also survived by his stepmother Renate Spaeth, and his uncle and aunt, Werner and Karola Rosshart.

John was predeceased by his mother Juanita Spaeth, and his father Herbert Spaeth. John had a strong love for both his parents and his German roots; he enjoyed cooking and could make a mean apple pie and a good batch of spaetzle. He often said, "La Familia" and enjoyed feeding people. He always uttered it was better to make too much than not enough. He never had hungry neighbors and lived by his motto "never trust a skinny German!"

John enjoyed the outdoors and would take his siblings on many hikes to Heart Mountain during their summers at the cabin. He taught his siblings to skip rocks on the lake. John’s claim to fame was his tree house at the cabin that he built from "borrowed" supplies from other cabins under construction. John naturally had a huge heart and was particularly close to animals, he had many lovable companions over the years, dogs, cats and even a bird named Elmo.

John enjoyed spending time in Germany with both Omas as a young child and he knew German much better than his siblings. Later in life, John learned his work trade from his father Herbert Spaeth and later passed it on to his son Thomas Spaeth. All three became master journeyman sheet metal workers. John apprenticed Shaun Valley, who was the best man at his wedding and a close friend of John and Thomas. John had the opportunity to work alongside his siblings, Anita, and David, in the family business down in Kentucky. He had a natural skill for working with metal and the knowledge he passed on will be valued and cherished.

As a young parent, John became a "hockey dad." He would take both Jonathan and Thomas to practice and was the coach of many teams. He was always ice side or bleachers side cheering his boys on. John's sense of humor and unique view on life was shared with his sons, over the years the three of them became the three amigos and/or goofballs and exchanged many laughs and lifelong memories that will forever be treasured.

Later in life, John fulfilled his life dream of moving out to the country and enjoyed the quiet life in Water Valley. While living in Water Valley, he met Cheryl, and they were married in September 2020. John and Cheryl enjoyed living in the country, going out for meals in Cochrane at Half Hitch, and spending time with grandchildren and their dogs. John, alongside his wife Cheryl, had many travel goals on their horizon, from driving a camper down to Louisiana or calling it quits to Alberta's cold winters and becoming official snowbird love birds down Mexico. He truly loved nature's beauty from mountains to ocean and enjoyed warm weather.

John was known for his zest for life and great sense of humor. These qualities will truly be missed by all. John will be remembered for always saying; “hey, I have a joke for you.”

Those wishing to pay their respects may do so at the Celebration of Life for John at McInnis & Holloway (Crowfoot, 82 Crowfoot Circle N.W., Calgary, AB) on Saturday, November 19, 2022, at 10:00 a.m. Reception to follow at the Funeral Home. Inurnment to follow at Queens Park Cemetery. Family and friends who are unable to attend in person are invited to join Mr. Spaeth’s service streamed live (see below) on the day of the service. For those who are unable to view live, a recording of the service will be posted. Condolences, memories and photos can also be shared and viewed here.