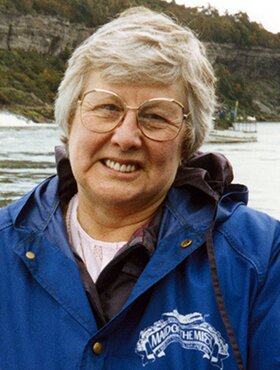 Jean was born in East Ardsley, West Yorkshire, on February 10, 1931. As a young girl, her family moved to Leeds, West Yorkshire where she lived until her marriage to John Schofield. Jean left school at the age of fourteen and entered the tailoring trade where she worked until retiring in 1987.

Jean met John (Jack) Schofield in 1947 while holidaying in Southport with her family. Jack was from the small town of Stalybridge, Cheshire and he was also on holiday with his childhood friend, Stan Fisher. A holiday romance blossomed and five years later in 1952, and after many letters and train journeys, Jean and Jack married. Jean, Jack and Stan remained friends until their passing. Stan still lives in England.

After the wedding they went about building a home in Stalybridge where they had three children, Richard, Anne, and Jane.  In 1959 Jack was transferred to Stoke-on-Trent where they built a home and added to the family when Paul was born. Then, in 1968, Jack was able to obtain a transfer to Leeds, in order to be closer to Jean’s family, which is where they settled until 1987.

Jean and Jack moved to Calgary in 1987 following Richard and family to be closely followed by Anne, Paul, Jane, and their respective families. Over the years since they built their new home in a new country where their family grew.

She was a member of the Good Companions where she met her long- time friends Gwen and Nev Pease.  Together they enjoyed dancing and carpet bowls amongst other activities. As a team Jean, Jack, Gwen and Nev won the Calgary area title, then as the Calgary representatives they won the gold medal at the Alberta Senior Games. Unfortunately, they were not able to attend the Canada Senior Games as the Alberta representative due to Nev’s deteriorating health. After Jack’s passing in 2012 Jean moved to Legacy Estates in Somerset where her good friend Gwen resided. Here she made a number of good friends, Ruth, Dorothy, Jack, Faye, Pat and Leila. There she enjoyed many an activity including games, sing-a-longs, she was also a member of their choir, many of the special events and coffee mornings arranged. She particularly enjoyed her games nights with her close friends. We know that she was very fond of them and really appreciated how they all looked after each other, rarely did they go a day without talking to her friends. This friendship was of great value to her.

Jean accomplished much through her life and was particularly proud of her family and friends. Jean was a fierce protector of her family. She would always put them first, provide for them, encourage them and scold them if she felt they were straying! But she always loved them no matter what and was always there for them.

Jean was forever knitting, quilting, a prolific letter writer and loved to read. Family members have received many knitted sweaters, cardigans, hats, gloves, tea cozies and anything that can be knitted Jean created it. Her knitted dolls, which included scarecrows, Brownies, golf players and soccer players were treasured by her grandchildren. Jean loved to write and receive letters staying in touch with long-time friends back in the UK and here in Canada.

Jean loved to travel. There were many memorable vacations and that love of travel was certainly passed down. Jean’s favourite vacations were when she was sharing that time with her family or close friends. Annual holidays in Britain when the children were young, trips to Europe with friends, touring in Canada and the United States after the move to Calgary all held memories for Jean. A couple of Jean’s favourite memories were a trip in 2016 to Paris, a city Jean and Jack had always wanted to go but never managed it until Jean was able to go in 2016 with Richard and Susan. The trip also included a visit to the Keukenhof   Gardens in The Netherlands particularly to see the display of tulips.  Jean loved them.

Jean is also survived by her sister-in-law Norah, who resides in Llandudno, North Wales; close friend Stan Fisher in Pewsey, England: as well as numerous nieces, nephews, cousins, and friends in Canada, England and Wales. Jean was predeceased by her husband Jack, her parents John and Annie Peckston, her sister Mavis and brother Brian.

At Jean’s request there was no funeral. A private Celebration of Life was held for the family. At a date to be determined, Jack and Jean will be reunited on this Earth with the scattering of ashes at one of their favourite places. Condolences, memories, and photos may be shared here.

The family would like to thank the caregivers who supported Jean in her wish to remain in her own home in her last months (AHS case manager Bobbi, caregivers Mercedes and Pearlie) and her Family Doctor, Dr. Jennifer Fleetcroft.