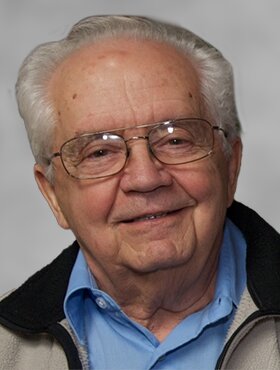 Frank Hallas beloved husband of Jeannine (Jean) Hallas (nee Lafrance), of Calgary, AB, passed away on Saturday, November 12, 2022, at the age of 93 years.

Frank was born in Lachine, QC, on February 21, 1929, to Adelaide and Douglas Hallas. Young Frank, his mother, and his sisters had a difficult time after the passing of his father in 1935. Frank was a cadet at the end of the war, and always held the efforts of our veterans in high esteem.

Twenty-two-year-old Frank headed west to Alberta in 1952 seeking work and new opportunities, and never looked back. Shortly after Jean followed and they were married in Edmonton. In the next few years, they had two children, David, and Diane. They all moved to Manitoba, then back to Edmonton, and they then ended up in Calgary where they bought the house that we’ve all been to, where they raised two kids and a series of yappy dogs. Most of the rest of Frank’s family eventually followed them out west and the holiday tables were full and happy.

Frank truly enjoyed family vacations and camping with the kids which eventually evolved into touring with Jean in the motorhome, across Canada, BC, and the U.S.

He was proud to have been “part of the fence post and telephone pole business that both connected and divided the province” – in his words.

Always keeping busy, Frank dabbled in music on the Hammond, took numerous courses, and earned himself a business diploma.

He was involved with the church, and scouting, and took his Toastmasters seriously. He enjoyed his lawn bowling and floor curling as well as the Bowness Senior’s Club. Until only a few years ago he enjoyed the gym numerous times a week.

Frank believed strongly in community, family, and responsibility.  He was a gentle spirit and was liked by everyone he met. Frank’s favourite quote on his wall was simply “THIMK!”. We all “thumked!” on that at some point or other; and still do!

He was an avid reader and crossword puzzler, but what Frank enjoyed most was the gatherings and celebrations of family and friends, he was always happy to partake in someone’s cooking. He never met a cookie he did not like.

He will be most remembered for his wonderful sense of humour, mostly full of wits and puns conceived well before dad jokes were invented.

Besides his loving wife, Frank is survived by his son David Hallas (Tina), daughter Diane Homan (Daryl), granddaughter Rae-Lynn and six great-grandchildren.  Frank was predeceased by his three sisters, June, Irene, and Rita; and his loving grandson Jason.

Frank... Dad… Grampa.. we will miss you! Always love you!

Funeral Services will be held at McInnis & Holloway (Chapel of The Bells, 2720 Centre Street North, Calgary, AB), on Monday, November 21, 2022, at 2:00 p.m. Reception to follow in the Hospitality Centre at the Funeral Home. Condolences, memories, and photos may be shared and viewed here.