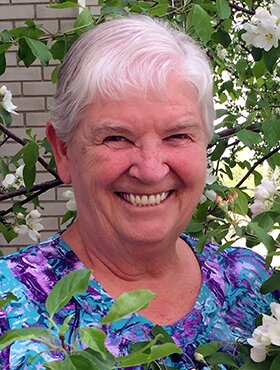 It is with profound sadness that the family of B. Dawn Graham (nee Ferguson) announces her passing on Tuesday, November 15, 2022, at the age of 79 years, after a short, but difficult, battle with Alzheimer’s Disease and Vascular Dementia. She will be very deeply missed by her family, but they are comforted by knowing she is reunited with her loving husband Gordon, who predeceased her in 2012, and that she is now at peace. We will miss her amazing smile, bright, beautiful blue eyes, and big heart.

Dawn’s first job was with Canadian Western Natural Gas Company Limited, which is where she met the love of her life, Gordon. She soon came to love Gordon’s young sons, Matthew (Brett) and Michael. They became a family on March 21, 1964, and soon added to the group with the birth of four more children. Dawn had several careers during her life, secretary, real estate agent, and property owner, but her true calling was being a loving wife, mother, grandmother, great-grandmother, sister, and friend.

Dawn loved flowers, and she kept fresh bouquets in the house every day of the year; she also had beautiful flower gardens throughout her yard. She was an avid gardener; she also loved Johnny Mathis and easy listening music, reading, and completing Sudoku, crossword, and jigsaw puzzles. She grew up loving, riding, and showing Morgan horses, and they had a special place in her heart throughout her life. She enjoyed spending time with family, friends, and assorted grand-dogs at the family farm near Sundre, AB, and she was known for her deep love for her family and her never-ending support of their interests and endeavours.

Dawn’s Celebration of Life will be held at McInnis & Holloway (Crowfoot, 82 Crowfoot Circle NW, Calgary, AB), on Thursday, November 24, 2022, at 2:30 p.m. Reception to follow in the Hospitality Centre at the Funeral Home. Condolences, memories, and photos may be shared and viewed here.

If friends so desire, memorial tributes may be made directly to The Alzheimer Society of Calgary at 800, 7015 Macleod Trail S.W., Calgary, AB, T2H 2K6, Telephone:(403)290-0110, www.alzheimercalgary.com, or to The Salvation Army www.donate.salvationarmy.ca, or to the charity of the donor’s choice.

Share Your Memory of
Dawn
Upload Your Memory View All Memories
Be the first to upload a memory!
Share A Memory