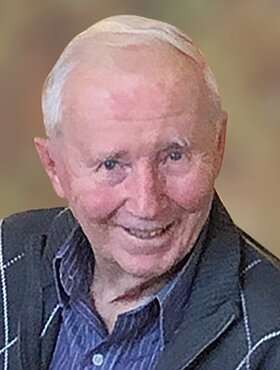 His parents, Henry and Elisabeth Busch left Russia to originally settle in Michigan. They moved to Alberta early in the lives of their first two children, Ann and Henry. Henry began his first, and only, job with the Canadian Pacific Railway at the age of seventeen in 1944. He worked for the CPR in several roles until his retirement on January 1, 1986.

Henry and Helen were part of Centre Street Church for decades and modelled a life of faith and service. Henry was devoted to his wife and family. When Helen's health deteriorated, he cared for her and showed the depth of love they shared until her passing. Henry lived his last years at St. Marguerite Manor in Calgary. He was cared for and loved by the staff. The family wants to express our appreciation for their wonderful care.

Perhaps Henry's greatest legacy was his faith and the example he set as a person who was completely content in all circumstances.

Memorial Services will be held at McInnis & Holloway (Chapel of The Bells, 2720 Centre Street North, Calgary, AB), on Saturday, November 26, 2022, at 10:00 a.m. Reception to follow in the Hospitality Centre at the Funeral Home. Graveside Service to follow at Queen's Park Cemetery. Family and friends who are unable to attend in person are invited to join Mr. Busch’s service streamed live (see below) on the day of the service. For those who are unable to view live, a recording of the service will be posted. If friends so desire the family would invite you to consider a donation to the Ministry of Centre Street Church, 3900 2 St NE, Calgary, AB T2E 9C1, Telephone: (403) 293-3900, www.cschurch.ca. Condolences, memories and photos can also be shared and viewed here.

We apologize if this is the case with today’s live stream but we want to assure you that this service will be recorded and uploaded following the service.

Share Your Memory of
Henry
Upload Your Memory View All Memories
Be the first to upload a memory!
Share A Memory
Send Flowers