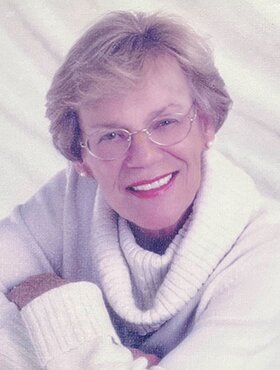 Hélène Major, beloved wife of John Charles “Jack” Major of Calgary, AB, passed away on Tuesday, November 15, 2022, at the age of 90 years.

Hélène was born on May 11, 1932, to Georgina and Paul Provencher in Trois Rivières, Quebec as their first and only daughter. Hélène joined her older brother Jean and was followed by her two younger brothers, Gaston and Jacques, to make a busy family with four children for the young forestry engineer and his wife. The Provenchers moved shortly thereafter to Baie-Comeau, where Hélène grew up as a toddler, teenager, and neighbour of young Brian Mulroney’s family.

Hélène was brought up to appreciate nature, the nearby Indigenous communities with whom her father worked, and the importance of both business and the arts. She was a good athlete, well-liked, and a person of principle. She had a quick wit and enjoyed laughing at both simple things, as well as humourous matters of a higher brow.

Hélène was an accomplished and diligent student. She graduated with a Bachelor of Arts degree from the prestigious Marionapolis College, a no-nonsense school run by the Ursuline order of Catholic nuns and connected to L'Université de Montréal. Given her ability, she only required a brief stint in business school afterwards to become one of the few qualified bilingual court reporters in the province, at a time when there was limited opportunity for women in workforce. She was completely fluent in both French (her first language) and English, and could also easily pass in conversational Spanish. She even enjoyed a sprinkling of chemistry for her option courses. As a young girl, Hélène had also learned to play the piano to a Grade 9 level, although sheepishly, she never felt she was skilled enough to play in public.

Hélène returned to Baie-Comeau from Montreal to work as a bilingual court reporter in Municipal Court, while saving money for her next full year of travel to Europe at age 22 with two friends/travel companions. The three young women adventurously hitchhiked around Europe at a time when it was safer than today. After her travels, Hélène returned to Montreal and worked as a general secretary for Sherman Williams before following the love of her life, Jack Major, then a recent University of Toronto Law School graduate and articling student, out west in 1958 to the burgeoning city of Calgary and one of the earlier versions of Bennett Jones law firm.

Their original blind date (going to a Marilyn Monroe movie) was arranged six years earlier by mutual friends during their university years. It was rekindled a few years later by a romantic twist of fate through a chance encounter at a busy Montreal train station, then a city of almost two million people. Five minutes on either side, Jack says, and you may not be reading this! (The authors are especially appreciative.) For Hélène, it was simply fate, and the rest was history.

What was only supposed to be a “one-year stint” in Calgary for Jack’s law articles, and began with Hélène working as an executive assistant to the co-owner of oil and gas company Scurry Rainbow, turned into a complete resettling. They soon married and adopted the new city as home to raise their family. Hélène willingly set aside a career outside the home to support Jack in his thriving law practice. With Hélène happily running a busy household with four active children, Jack was able to service a demanding Bennett Jones clientele and later serve on the Alberta Court of Appeal and the Supreme Court of Canada.

Hélène lived life with passion. She did not discriminate with whom she shared her friendly demeanour and, as a result, formed a great many life-long friendships. As a mother, Hélène was known to spoil her children with the frequent delivery of hot homemade meals (including the occasional surprise of hot dogs in thermoses) to St. Augustine Elementary and Junior High School, while brown bag lunches were the norm. The school's Principal always took delight announcing this unique gesture over the school-wide intercom at lunchtime. Hélène also treated her beloved cats almost like children: Minou, Socks, and especially, Pappy, all of whom regularly dined on microwaved chicken breasts and had a plethora of catnip toys at the ready.

Hélène was an incredible spouse and partner, enthusiastic about almost everything, superb company, and willing to try new things with those she trusted, even including parasailing on a family vacation in Mexico. She juggled multiple roles and worked tirelessly to support her family and community while making it look effortless.

In what little spare time she had, Hélène's favourite hobby was bridge. She started out playing recreationally but was soon taken by the game which appealed to her logical mind. By the time she turned 70, she had earned the coveted designation of "Life Master" after qualifying with tournament points from around the continent.

Hélène's greatest pride was seeing her children and grandchildren grow into the various people they have become. Unquestionably, everyone in her extended family was touched and influenced by Hélène’s warmth, compassion, and love. Hélène showed strength and character coping with Suzan's tragic passing in June 2013, which left a hole in all our hearts. While she took immense joy in everyone else's success, Hélène was modest about her own (and would be uneasy reading this narrative about herself).

While Hélène struggled with memory challenges in her most recent years, she was always pleasant and grateful for all of those helping her. She considered herself blessed and lucky to have lived a full life of over 90 years. The Major Family would like to extend our collective thanks to the staff of the Staywell Manor, the Libin Cardiovascular Wing of the Foothills Hospital, the Rockyview Hospital, Kathy Mendham of Proactive Seniors, and her most friendly companions Lorna Hunter, Gayle Ferrara, and Zeldha Dedekind.

A Funeral Mass will be celebrated at St. Anthony’s Catholic Church (5340 – 4th Street S.W., Calgary, AB) on Wednesday, November 30, 2022, at 10:30 a.m. followed by a Celebration of Hélène’s Life at the Calgary Golf & Country Club (one block west of Elbow Drive on 50th Ave. S.W.) at 12:00 p.m. for those who may wish to pay their respects. Condolences, memories, and photos can also be shared and viewed here.

Share Your Memory of
Hélène
Upload Your Memory View All Memories
Be the first to upload a memory!
Share A Memory