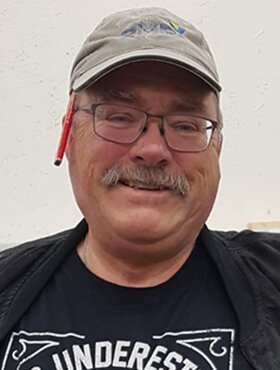 Jeff was born in Guelph, ON on February 7, 1955. After graduating with a Bachelor of Applied Science in Chemical Engineering degree from the University of Waterloo in 1979, he moved to Alberta. He married Lorraine in 1985 and they had four daughters together. Jeff often let his daughters know that they were the end to any semblance of peace and quiet in his life. He also liked to joke that he must have done something wrong in a past life to end up with so many daughters.

As most people are aware, Jeff was a man of few words and one stellar mustache. Although he came across as very gruff, he was really just a teddy bear on the inside (not that anyone dared tell him that to his face). He is known for his dry sense of humour which he kept until the end (as some of you are well aware of).

Jeff worked as a chemical engineer in the Alberta Oil Patch for 38 years. He was a member of APEGA and SPE. Throughout his life, he enjoyed woodworking in his free time and even built his own wood shop to “tinker” in upon his retirement. Somehow Lorraine convinced him to do a few projects here and there for friends and family and somewhere along the way Jeff Parkinson Woodworking was created. His best selling and most beloved project were his farm sets that are now gracing homes across Canada.

Jeff was also an avid sports fan, especially the Calgary Stampeders. Him and Lorraine were season ticket holders for over 30 years and rarely did he miss a game. He vehemently refused to cheer for Edmonton and Saskatchewan. He also liked to relax, socialize, and sit around a fire at Gull Lake. Jeff enjoyed playing card games with friends and family. His daughters often blame him for their competitiveness.

Besides his loving wife, Jeff is survived by his four daughters, Taryn, Cassandra, Avery, Devon; son-in-law Nick, and two grandsons Ivan and Jack.

Jeff is also survived by his brother and sister-in-law, Cliff and Nora; three sisters and brothers-in-law, Martha and Peter, Melanie and Ken, Karen and Chris, as well as numerous nieces, nephews, great nieces, great nephews, cousins, and friends.

Jeff was predeceased by his parents, Jack and Ann Parkinson and in-laws, Les and Elva Knapp.

A Celebration of Life will be held in the New Year.

Share Your Memory of
Jeffrey
Upload Your Memory View All Memories
Be the first to upload a memory!
Share A Memory
Send Flowers