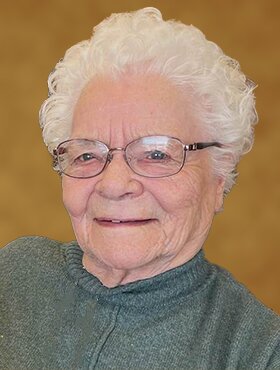 Peggy grew up in the dirty thirties on the family farm near Hanna. She completed her early education in a one room schoolhouse and later attended Olds Agricultural College before moving to Calgary. Peggy applied her new skills working at the Colonel Belcher Hospital where she met the love of her life Ernie. They married in November of 1948 and began their lifelong journey together in their beloved “little white house” in the town of Bowness, where their two sons were raised and where Peggy lived until moving into supported living in 2020.

Peggy worked part time at the Bay for many years and was active in her community, as a cub leader and volunteer at the Bowness Seniors Centre. Peggy valued family above all and was lovingly committed to ensuring that her sons would have a solid foundation for success in life.

She was a good fisher and excelled at preparing a meal of freshly caught trout, wild berries, and home-grown potatoes from her huge garden.

She loved adventuring in their fifth wheel and traveling to visit her family-across Canada and in Europe. Her favourite saying was “It is what it is”. This nicely captured her strength of character She complained little and judged none

She is survived by her sister-in-law, Betty of Calgary; her two sons, Brian and Don; along with four grandsons and six great-grandchildren. Peggy was predeceased by her loving husband Ernest Matthews, and her two brothers Tom and Jess.

Funeral Services will be held at McInnis & Holloway (Crowfoot, 82 Crowfoot Circle NW, Calgary, AB), on Saturday, December 3, 2022, at 10:00 a.m. Reception to follow in the Hospitality Centre at the Funeral Home. Graveside Service to follow the reception at Queen’s Park Cemetery. Condolences, memories, and photos may be shared and viewed here.

Share Your Memory of
Peggy
Upload Your Memory View All Memories
Be the first to upload a memory!
Share A Memory
Send Flowers