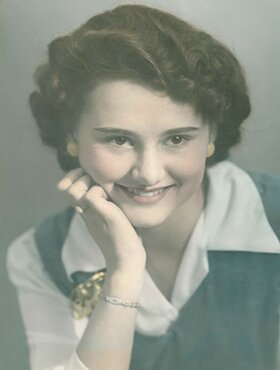 Gladys was predeceased by her loving husband of 68 years, Howard, her daughter Teresa, and son Howard. She is survived and lovingly remembered by her son David (Debbie), daughter Joanne (Robert), daughter-in-law Linda; grandchildren, Max, Allison, Emily, Teagan, and Danae; and great-grandson Wyatt. She was a very active member in her community and was blessed with a large circle of friends and extended family, all of whom were of great importance in her life.

Gladys was born in Calgary to parents Haydee and John Hunter. She spent a number of her childhood years in the community of Sylvan Lake. Throughout her childhood, she spent summers on her maternal and paternal grandparents’ farms. Gladys fondly remembered these summers, and often regaled her family with stories about her adventures and exploits during that time.

Her family moved back to Calgary in the late 1930s, and Gladys was proud to call Calgary home for the remainder of her years. She attended Crescent Heights High School, where she first met her husband, Howard. She and Howard graduated together and were married shortly after. She had 4 children and was a loving and dedicated stay-at-home mother for a number of years. Once her children were older, Gladys re-entered the workforce full-time as an accounts receivables clerk at Kings Medical Clinic. Several years later she took on the business manager role at the clinic and stayed in that role until her retirement in 1990.

After retirement, Gladys enthusiastically focused on her many hobbies and passions. Her and Howard were avid volunteers within both their church and community. She was also an Independent Diamond Regal Representative for several years following her retirement. Gladys had a variety of interests over the last few decades of her life, including gardening, sewing, knitting, crocheting, golfing, and collecting decorative spoons, coins, and stamps. She was fond of traveling with her husband; in the years following their retirement, they were often out of the country visiting a number of different worldwide destinations.

Family was always extremely important to Gladys. She loved her children and grandchildren immensely and was a steadfast supporter of all their endeavors. Gladys and Howard were regular fixtures at swim meets hockey and softball games, band performances, and dance recitals. Maintaining family connections and building relationships with extended family was certainly a priority for her throughout her life. She thoroughly enjoyed helping with the annual family reunion for her paternal family and was constantly in communication with various other family members around the world. She became interested in genealogy and was passionate about tracing the family trees of both herself and her husband. Her and Howard embarked on a number of trips to Western Europe for this purpose and connected with many extended family members along the way.

Unquestionably, Gladys embodied the phrase “joie de vivre”. She was a true force of nature and led her life with kindness, compassion, determination, and enthusiasm. Her endless love and support of those closest to her was a true blessing. She will be lovingly remembered and greatly missed by all those whose lives she touched.

We would like to thank all the staff at The Manor Village Varsity, especially those from the Memory Care unit, for the exceptional care and compassion Gladys received over the last few years. If family and friends so desire, in lieu of flowers, memorial donations may be made to the Alzheimer Society of Canada, 20 Eglinton Avenue West, 16th Floor, Toronto, ON, M4R 1K8, Phone: 416-488-8772, https://support.alzheimer.ca/site/Donation2?df_id=8040&mfc_pref=T&8040.donation=form1

A private Funeral Mass will be celebrated at a later date. Condolences, memories, and photos may be shared and viewed here.