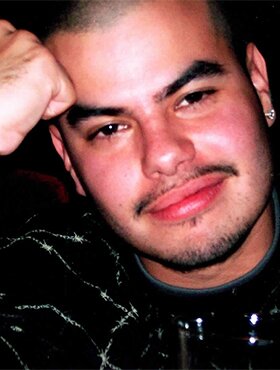 He immigrated to Canada on July 8, 1997, alongside his family, Jose, Beatriz, Laura, and Salomé.

Mateo accomplished much throughout his life and was particularly proud of his musical talents. Mateo was an immensely talented lyricist, musician, and poet. He composed countless songs (more than 600 songs/poems/scripts) throughout his life. He never ceased to amaze his family with his creative writing and expansive vocabulary. Mateo had an incredible mind and ability to compose complex, heartfelt songs. He was very passionate about sharing his gift of writing with others. He dabbled in several genres including rap, reggae, and trap. Mateo’s rap artist’s name was “12th Parallel”.

He enjoyed collaborating with other artists, including older sister Laura and brother-in-law, Benoit, whom had the privilege of recording some of his songs. Mateo also enjoyed writing lyrics and poetry with his mother, Beatriz. He wrote and composed a beautiful song named “Guardian Angel” that he dedicated to his mother, Beatriz. His sisters, Laura, and Salomé were immensely proud of his lyrical work and were his biggest fans.

The family’s favourite past time included getting together to play instruments, and sing. Mateo on the drums, and percussion, his brother-in-law Cliff on the guitar, sisters Salomé, and Laura, along with his mother Beatriz, and Father, Jose, on vocals.

In addition to music, Mateo was also a talented painter, he enjoyed yoga and meditation and had a particular interest in religions. He received training and held a brown belt in Kung Fu, Ninjutsu and Wing Chun. He was also an avid, and very skilled skateboarder. He spent countless hours researching his interests, and hobbies and was incredibly knowledgeable in many of these areas. None of this would have been possible if it wasn’t for the support, and encouragement of his father, Jose, who did everything he could to ensure that Mateo would be able to accomplish his goals and reach his dreams.

Since the age of 15, Mateo struggled with mental health illnesses. His parents, and sisters fought hard to advocate for him to get the help that he needed and deserved, and to provide him with the best quality of life. Despite his and his family’s best-efforts, Mateo was unable to overcome these challenges. Regardless of the ups and downs, Mateo demonstrated love for his family in his own ways. He was always willing to lend his advice, was very affectionate and enjoyed giving gifts to his parents, and sisters. He was also very generous with those around him, and often donated clothes and food to others in need.

He will be most remembered for his kind heart, creativity, sense of humour, and care of others he met throughout his life. He enjoyed making people laugh and seeing them smile.

Mateo is survived by his parents Jose Gonzalez, Beatriz Alzate; his sisters, Laura Gonzalez, Salomé Gonzalez; and brothers-in-law, Benoit, and Cliff who live in Calgary, Alberta. As well as his extended family living abroad, and numerous friends.

Funeral Mass will be celebrated at St. Bonaventure Catholic Church (1600 Acadia Drive S.E., Calgary, AB) on Thursday, December 8, 2022 at 11:00 a.m. Reception to follow at the Parish Hall.  Condolences, memories, and photos can also be shared and viewed here.

Share Your Memory of
Mateo
Upload Your Memory View All Memories
Be the first to upload a memory!
Share A Memory
Send Flowers