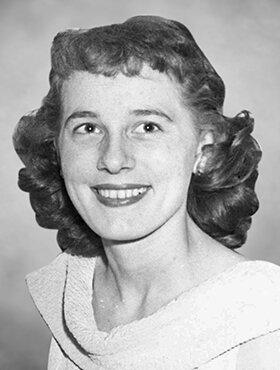 Mary was born in Tilley, AB on April 26, 1931, to Maria and Alex Chrumka, recent immigrants from Slovakia (then Czechoslovakia). She attended high school at St. Theresa College in Medicine Hat, AB where she enjoyed playing basketball, figure skating and sewing costumes for the school plays. Mary then moved to Calgary where she met John (Jack) Oliver Telfer at United Canso Oil & Gas Ltd where they both worked. They married on April 24, 1954.

Mary and Jack built their home in Meadowlark Park where they raised their family. She joined St. Anthony’s parish in 1955 and was an active member of the church community throughout her life. Mary took up downhill skiing in the 1960s and soon had her entire family enjoying the mountains and numerous fun ski holidays. Mary and Jack were members of Canyon Meadows Golf Club and spent many hours together on the course. After her husband Jack passed away in 1989, she continued to golf and loved to go out in the evening to ‘hit a few balls’. She also liked to travel, garden, and paint her house. She always said she didn’t like to cook, but she was in fact, a great cook and maker of delicious cookies. Mary liked to refinish antique furniture and collect little nic nacs, which gave her joy. She also loved rocks.

Mary is survived by her daughter Jo Ann Telfer and her son Don (Paula) Telfer; as well as her grandchildren, Alexandra (Zan Zan to her Gram) Marchuk and Erik Marchuk (Taylor Lindal) all of Calgary. Mary is also survived by her sister Josephine Urban of Innisfail, AB, her brother Alex (Shirley) Chrumka of Brooks, AB and her brother John (Carmen) Chrumka of Calgary; as well as nieces, nephews, and friends. Mary was predeceased by her husband Jack Telfer, her brother Stephen Chrumka and her very dear friend Florence Bilozir.