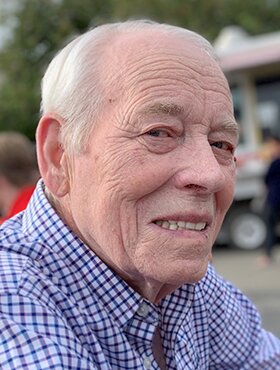 He is survived by his beloved wife Lynne; his children, Doug (Louisa) of Whitehorse, and Barb (Rob) of Calgary; his four grandchildren, Kyle (Brittany), Joel, Kristina (Garrett) and Julia (Jamie); his great-granddaughters, Freya and Victoria; his sister, Marilyn; and forever friends, Avoline and her son Curtis. He was predeceased by his parents Thomas and Mabel Gee and his siblings Gordie, Muriel, Evelyn and Lawrence.

Allan was born on the family farm outside of Lenore, Manitoba where he spent his childhood helping on the farm. He found his way to Edmonton where he met and married Lynne. Allan was a trucker, he worked alongside his brother, Gordie most of his life at Yukon Freight Lines (originally Gordie’s Trucking), first as a truck driver and then as a heavy-duty mechanic. Allan could fix anything and was always in demand for his skills. After they sold YFL he worked for Frontier Freight Lines until he retired. Allan loved sports, he played hockey and baseball in his early years and coached many of the local kids. However, his passion was curling, and he could often be found at the curling rink with his buddies and his son, Doug. Allan was a true Yukoner, he moved in 1965 and spent the rest of his life there. He had the honour of representing Yukon for many years curling in the Senior Nationals and the Canadian Masters.

A hole has been left in our lives and hearts with his passing.  There will be a service held at the Whitehorse Curling Club on Friday, December 9 at 2:00 p.m. Condolences, memories, and photos can also be shared and viewed here.

As expression of sympathy, if friends so desire, please consider a donation to the Whistle Bend Community Day Program through the GoFundMe using the link below.

Share Your Memory of
Thomas
Upload Your Memory View All Memories
Be the first to upload a memory!
Share A Memory
Send Flowers