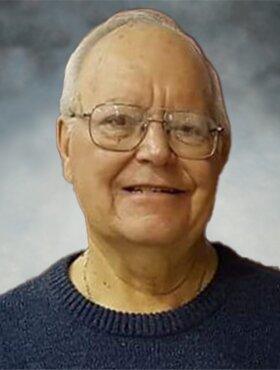 Conrad Lackner, beloved husband of the late Sharron (nee Harper) of Calgary, Alberta, passed away on Saturday, November 26, 2022 at the age of 82 years.

While he held a variety of sales and marketing positions and owned a few companies over the course of his professional life, Conrad's most important job was his first major employment at IBM, where he met Sharron Harper. They would go on to be married for more than 40 years, until Sharron passed in 2006.

Conrad participated in many sports, including hockey, football, soccer, fishing, and curling, but he was an especially avid golfer, and remained a member of the Bearspaw Golf Club for several decades.

Conrad accomplished much through his life and was particularly proud of his hole-in-one on #11 at the Eagle Creek Golf Club in Dunrobin, ON, on April 23, 2010, and his trip to watch The Masters in person with Gary, Linda, Ron, and Kathy in April of 2018.

He will be most remembered for his sense of humour, love of golf, lifelong ambitions, and how much he loved and cared for his family.

Conrad is survived by loving daughter Eden Lackner of Calgary, AB; his brothers, Ron (Kathy) Lackner of Toronto, ON, Garry (Linda) Lackner of Dunrobin, ON, Larry (Lynne) Lackner of Haliburton, ON) and John Lackner of Kingston, ON; his sister, Trudy Lackner of Scarborough, ON; as well as numerous nieces, nephews, cousins, and friends. Conrad was predeceased by his wife Sharron; and his parents, Doris and John Lackner.

Funeral Services will be held at McInnis & Holloway (Crowfoot, 82 Crowfoot Circle NW, Calgary, AB), on Friday, December 16, 2022 at 2:00 p.m. Reception to follow in the Hospitality Centre at the Funeral Home. Family and friends who are unable to attend in person are invited to join Mr. Lackner’s service streamed live (see below) on the day of the service. For those who are unable to view live, a recording of the service will be posted. Condolences, memories, and photos may be shared here.

Share Your Memory of
Conrad
Upload Your Memory View All Memories
Be the first to upload a memory!
Share A Memory
Send Flowers