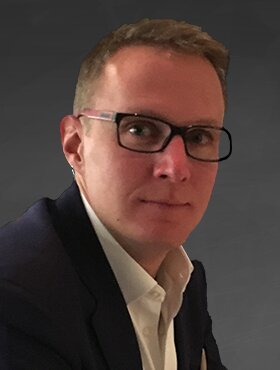 It is with great sadness that we announce the sudden death of Warren Yunker, beloved husband of Rebecca Sparkes and father of Adam and Eric Yunker, at the age of 46 years.

Warren was born in Morden, MB. His formative years were spent in St. Albert, AB with his parents, Keith and Shirley, and his sister Leanne. In St. Albert, he established lifelong friendships through school and his work as a lifeguard and swim instructor (but would have rather forgotten his part-time job at Bonanza). He had many good times with Brian, Wayne, Erin and Steve; the four of them and their families have remained important parts of his life for the past 30 years.

Warren completed a Bachelor of Science, PhD in Cell Biology and Physiology and Doctor of Medicine degree at the University of Alberta in Edmonton. During this time, he started dating fellow medical student Rebecca Sparkes (whom, according to his friend Erin, was “a much better choice” than Warren’s previous girlfriends), and they continued their relationship long distance after Rebecca moved to Calgary for her Medical Genetics residency in 2003.

When Warren became the first resident in the University of Calgary’s brand-new otolaryngology program, he and Rebecca were very glad to be in the same city after two years living apart; they were also relieved to say goodbye to the frequent weekend commutes on Highway 2, often when one or both was post-call, and during all manner of Alberta weather! They married in Banff in 2005 amongst family and friends and welcomed their first son Adam in 2008. Warren went on to pursue subspecialty training in pediatric ENT surgery at Baylor College of Medicine in Houston, Texas and their son Eric was born there. Although they had become quite fond of the warm weather, Texas barbecue and good Mexican food, they were happy to return home to Calgary in 2011 and begin their careers at Alberta Children’s Hospital (ACH).

Warren loved being a surgeon and shared a close bond with everyone in the ACH Sensory Clinic and operating room, all of whom were like family to him. Around the hospital, he was known for his wry sense of humor and his famous catchphrase – you guessed it – “living the dream.” He was tremendously caring and had a lighthearted and gentle approach with his young patients and their families. Although he was always very tidy and disliked clutter of any kind, he secretly prized the special notes, drawings and gifts from the children he cared for and always found a place to keep these treasures on his shelf.

Outside of work, Warren loved skiing and golfing; he enjoyed teaching Adam and Eric (and tried unsuccessfully to teach Rebecca!) these favorite pursuits. He also loved running and biking, and had a passion for deep sea fishing. He enjoyed good food and wine, scotch and the occasional cigar. He loved traveling, and he and his family were fortunate to go on adventures to the UK and Egypt in his final years. His latest “bucket list” plan (much to Rebecca’s horror) was to go shark diving off the coast of Central America. Unfortunately (at least in his words, not his wife’s), this trip was cancelled due to the COVID19 pandemic, and he never had the chance to reschedule.

As his condition progressed, Warren became very passionate about, and often frustrated by, inequities affecting people living with physical disabilities. He recognized that limited access to medical care and rehabilitation services not covered by the provincial health care system, and restricted funding for appropriate adaptive equipment, were barriers to optimizing the quality of life of people with neurologic conditions. Despite his own struggles, he wanted to make things better for others, especially those without adequate personal, social or financial resources, and was a fierce advocate for change.

Unfortunately, Warren’s disease took a lot away from him, including the recreational pursuits he enjoyed most, his independence, and ultimately his surgical and medical career. Sadly, the toll the disease took on his physical and mental health overwhelmed him despite incredible support from his family and colleagues, and he took his own life. His death reminds us of the devastating impact of mental illness, disability, chronic pain and suffering. It also highlights the critical need to reduce shame and secrecy around, and to continue having open conversations about, these issues – including suicide. We must continue to raise awareness and support each other with courage, love and empathy.

Besides his devoted wife Rebecca and beloved sons Adam and Eric, Warren is survived by his mother Shirley, his sister Leanne (Brent Stang), nephew Shawn and nieces Grace and Sarah. He was very much a part of Rebecca’s family, and will also be dearly missed by his father-in-law Dave, siblings-in-law Julie (Mark), Jen (Keith) and Dan (Andrea), and all their children. He was predeceased by his father Keith Yunker in 2011 and his mother-in-law Karen Sparkes in 2014. Warren’s impact was far reaching, and he will also be mourned by an extensive network of colleagues and friends who loved him.

Warren’s family wishes to extend thanks to the many health care providers with whom he engaged over the past several years. In particular, Rebecca wishes to acknowledge his wonderful family physician, Dr. Heather Downes, his compassionate neurologist Dr. Sam Chhibber, psychiatrists Drs. Jodie Oosman and Lita Appavoo, and the Synaptic Neuro Rehabilitation team, all of whom who did everything in their power to help him overcome obstacles and cope with his many struggles. A special note of acknowledgement is also owed to his dear friend, the late Blair Hockley, who was a tremendous source of companionship and understanding in the years following Warren’s diagnosis, and whose untimely death in 2021 was a huge loss.

If desired, donations can be made in Warren’s honor to the Warren Yunker & Family Legacy Fund, which has been established in partnership with the Synaptic Neuro Rehabilitation Centre to improve the quality of life for people living with neurologic conditions and disabilities. All funds raised will be directed to help individuals in financial need access community-based rehabilitation services, adaptive equipment and mental health supports for themselves and their families. To donate in honor of Warren: https://www.synaptichealth.ca/support-us/donate/

A Celebration in honor of Warren’s Life will be held at McInnis & Holloway (Deerfoot South, 12281 – 40th Street SE, Calgary, AB) on Friday, January 13, 2023 at 6:30 p.m. Family and friends who are unable to attend in person are invited to join Dr. Yunker’s service streamed live (see below) on the day of the service. For those who are unable to view live, a recording of the service will be posted. Condolences, memories, and photos can also be shared and viewed here.

Share Your Memory of
Dr. Warren
Upload Your Memory View All Memories
Be the first to upload a memory!
Share A Memory