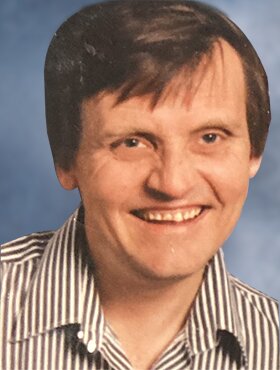 Bill was born in Lethbridge, on July 17, 1954. At a young age, his family moved to Calgary, where his entrepreneurial father owned and operated a gas station and one of Calgary’s original taxi companies. Bill spent many hours with his dad at “Northmount Cabs” with Bill occasionally dispatching cabs over the radio. In the early 1960’s the Bailey family now with two added brothers moved to Kelowna B.C. where Bill resided until the early 1980s before returning to Calgary.

Once in Calgary, Bill immersed himself in various self-help groups and programs for the handicapped.  These groups and programs provided Bill with the confidence and skills to live independently and develop close relationships with many people.
Eventually, the Bailey Family, mom, dad, and the three brothers resided back in Calgary. Until his passing Bill watched his family grow with the additions of four nephews, six great-nephews, and one great-niece. He was very proud to be “Uncle Bill” and talked about his nephews and niece often.

Bill was predeceased by his parents, Rollie “Bill” and Ethel Bailey.