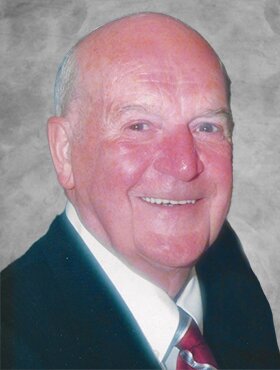 Gerald was born in Calgary and grew up in Bridgeland. His youth was spent delivering newspapers, working at his father Alex’s gas station, and playing street hockey. St. John’s Lutheran Church was a big part of his early years, and it was there that he met his wife Dorothy, with whom he shared a happy and devoted 66 years.

Gerald’s entire career was in the travel industry. He started out as a ticketing agent at the old Calgary Airport, then became a travel agent and agency manager. Over the years, he lived and worked in Calgary, Toronto, Edmonton, and Vancouver. He had a loyal following of clients, and his work enabled him and Dorothy to travel to various parts of the world.

Gerald was an avid golfer. Next to Dorothy, golf was the love of his life. He thoroughly enjoyed his time on the links with Dorothy, many good friends and family members.

Besides his wife Dorothy, Gerald is survived by his daughter Deborah and her husband Paul Hennig who live in Stratford, ON; his granddaughter Ainsleigh Hennig, who lives in Bredbury, UK; his sister Peggy and her husband Robert Campbell (Calgary); and numerous cousins, nieces, nephews, and friends. Gerald was predeceased by his mother Lydia, father Alexander, his brother Gary and sister-in-law Janet.

Funeral Services will be held at McInnis & Holloway (Deerfoot South, 12281 – 40th Street SE, Calgary, AB) on Monday, December 5, 2022, at 2:00 p.m. Reception to follow in the Hospitality Centre at the Funeral Home. Condolences, memories, and photos may be shared and viewed here.