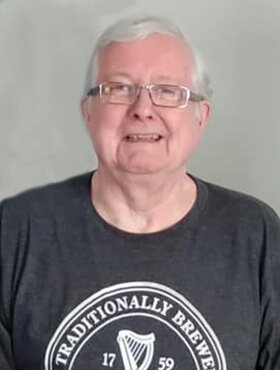 “God called your name so softly, that only you could hear,

No one heard the footsteps, of angels drawing near.

His garden must be beautiful, he only takes the best.”

Edward McCafferty passed away suddenly in his home on Wednesday, November 30, 2022, at the age of 75 years.

Eddie was born in Glasgow Scotland to Mary and Patrick McCafferty. He was the youngest of six children. Eddie arrived in Calgary, AB on December 16, 1975, where he resided ever since.

He loved to sing and taught himself to play guitar.  In his earlier years, he would often be the life of the party showing off his musical talent.  To those who knew Eddie, knew him as a kind helpful sole who took great satisfaction in helping his friends out when they were in need.  He was a hard worker and enjoyed playing the role of the family handyman - his family enjoyed letting him play that role – he had a solution for everything.  Eddie had an infectious laugh that could be heard around the house brining a smile to everyone who could hear.  He will be sadly missed by his family and friends.

May your soul rest in peace, dad, granddad, brother, uncle, and friend.

Celebration of Life will be held at McInnis & Holloway (Eastside, 5388 Memorial Drive NE, Calgary, AB) on Friday, December 16, 2022 at 2:00 p.m. Reception to follow in the Hospitality Centre at the Funeral Home. Condolences, memories, and photos can also be shared and viewed here.