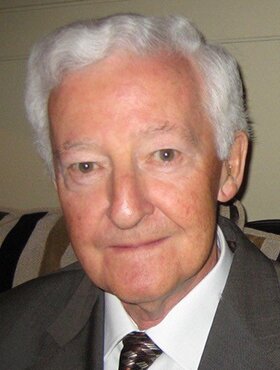 David C. Lake of Calgary, AB, passed away peacefully in his home on Wednesday, January 11, 2023 at the age of 90 years.  He is rejoining at long last, the love of his life Denyse who passed away in 2005.

David was born in North Sydney, NS on August 26, 1932 to Ernest Lake and Theresa MacNeill Lake.  He grew up with his brothers, Arthur Lake, Stuart Lake, and Barry Lake; sister Theresa (Teenie) Lake and twin sister Cathy Peck.  All of whom predeceased him.

After graduating from high school, Dave set off West to seek work in Toronto. Dave was eventually transferred to Trois-Rivières. There, he joined a racquet club, where he also met Denyse. The first time they met they were paired in mixed doubles and won their competition carrying away the prize (a turkey). Dave walked Denyse home that evening. Even though neither spoke each other’s language, Dave asked to see Denyse again and their relationship blossomed.

Denyse would prove to be the spark that ignited Dave’s ambitions and gave him purpose. He enrolled at the University of Ottawa to pursue an Economics degree. Dave graduated from the University of Ottawa with a degree in Economics.  While attending University, he started the International Students Association. Immediately after completing his degree, Dave and Denyse were married on May 28, 1960. After they were married Dave and Denyse settled and started their family in Montreal, QC where his children, David, Michael and Sophie were raised.

Dave had a very successful career in investment banking with notable stops at Nesbitt Thomson in Montreal and Dominion Securities in Calgary. By all accounts Dave earned the respect of his coworkers and clients as a hardworking, intelligent and insightful advisor who was fair and honourable.

In 1977, the family moved to Calgary, AB as Dave’s career continued to flourish.  The family grew as Dave welcomed his son David’s wife Carmen and his son Michael’s wife Magni into the family. He was a great papa and will forever be remembered by his grandchildren, Danielle, Spencer, Siri and Sonja.

After retiring, Dave and Denyse travelled extensively and enjoyed spending time with their grandchildren and friends. In his later years, his generosity and kind spirit, (and love of telling jokes) continued. Notably, he gave his time to Partners in Literacy, reading with children at the Connaught Elementary School and funded the Denyse Lajoie-Lake Fellowship at the Hotchkiss Brain Institute.

Dave will be missed by his children, grandchildren, surviving sister-in-law (Renee Lajoie St-Cyr) and all his nieces and nephews.  We take comfort in knowing that Dave is reunited with his love.  We know they will be watching over us.

Condolences, memories, and photos may be shared and viewed at www.McInnisandHolloway.com.

Share Your Memory of
David (Dave)
Upload Your Memory View All Memories
Be the first to upload a memory!
Share A Memory