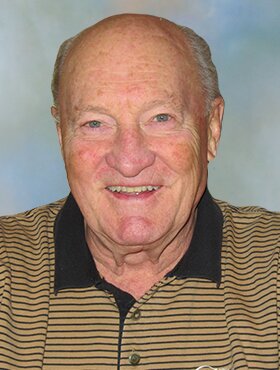 That’s the Bob Jacobs who was one of the swinging bachelors at the “Villa on the Hilla”, in the early days of the oil industry. Bob came to Calgary from Regina where he was the quarterback for the Campion College football team, played second violin in the Regina Symphony, and graduated from the University of Saskatchewan. He obtained his CA designation in 1947. In 1965, he and his close friend Keith Rolfe became partners in the Chartered Accounting firm, Jacobs, Rolfe and Co. He was the Canadian Representative of Milbar Hydro-Test Ltd., a pipeline testing firm out of Louisiana, and held this position until his death.

Bob was an avid golfer. He was the course marshal for twenty years at the Bob Hope Classic in Palm Springs, where he wintered. He was a member of Canyon Meadows Golf Club and Whitefish Lake Golf Club for many years, and he played in the PGA Seniors Pro-Am at the Glencoe Club. He took advantage of competitive curling at the Glencoe Club as well. In 1959, he married Doreen Harris, and they had three daughters, Louise, Michele, and Nancy. Whitefish Lake was their second home, where they were enthusiastic skiers of both water and snow. Sadly, Doreen passed away in 1983. Thirty-five years ago, he married Biddy Pyke and was stepfather to David, Dana, and Kendall.

Bob was active in the organization of the renowned annual Calgary Lobster Boil, where he would perform his ability to hypnotize live lobsters. Making spaghetti dinners for fifty people was no challenge for Bob, and if you were lucky enough to be a house guest, his souffle omelet would have made Julia Child an also-ran.

Bob, like all Saskatchewan fellas, was an excellent dancer. Bob and Biddy enjoyed a great social life, including golfing, the Confrerie de la Chaine des Rotisseurs as he was a Chevalier in both Calgary and Palm Desert, and meeting with their friends at the Calgary Golf and Country Club, as well as the Glencoe Club. They were great fans of both the CFL and the NFL, and they were charter members of the Championship Marathon Bridge Group.  Bridge was their waiting game, particularly in airports, Cape Town, Singapore, St Petersburg, Athens, Bangkok, Istanbul, and they even came second in a National Bridge Tournament in Cuba. Hours before he passed away, he was playing competitive bridge online and set his opponents twice.

We shouldn’t be sad because he won, he finished the game. Godspeed Bob.

A Celebration of Bob’s Life will be held at McInnis & Holloway (Park Memorial, 5008 Elbow Drive SW, Calgary, AB) on Wednesday, January 25, 2023 at 2:00 p.m. Reception to follow in the Hospitality Centre at the Funeral Home. Family and friends who are unable to attend in person are invited to join Mr. Jacob’s service streamed live (see below) on the day of the service. For those who are unable to view live, a recording of the service will be posted. Condolences, memories, and photos can also be shared and viewed here.

Share Your Memory of
Robert L.
Upload Your Memory View All Memories
Be the first to upload a memory!
Share A Memory
Send Flowers