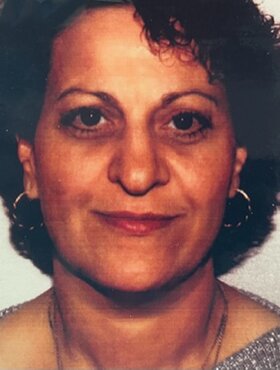 Raffaela (Lina) Serpico-San Martin, beloved wife of Segundo San Martin, passed away after a brave battle with liver disease on Saturday, December 24, 2022, at the age of 70 years.

Lina was later married to Segundo San Martin on June 20, 1981. She would go on to cut and style hair well into her golden years, as well as a long career working at the airport. Lina accomplished much through her life, but was most proud of her family.

Besides her husband, Lina is survived by her sons, Paul and Danny (Lindsay); and her beloved grandchildren, Luca and Raeya San Martin. Lina is also survived by her sister Josephine (Umberto) as well as her niece and nephew, Antonio and Diletta (Luisa).

Lina was predeceased by her parents, Saverio and Luisa Serpico, as well as her brother Gennaro Serpico.

Lina spent her time reading (anything time travel or vampire related!) she also enjoyed her tv series (Star Trek!), and her family lost count of how many times she watched The Mummy movie. She had a weakness for purses, and you’d rarely spot her without her favourite Tim Horton’s coffee. Though her pride and joy were her grandkids, you’d be hard-pressed to catch up with her over coffee and cookies and not hear a story about her babies.

Lina’s once annual trips to Chile with her husband, and her last and most recent trip to Italy with her sister, were her most memorable trips taken. Her family with fridges full of magnets, and Italian cheese to prove it!

Funeral Services will be held at Mother Mary of the Redeemer Church (1714 14 Ave NE, Calgary, AB), on January 12, 2023 at 11:00 a.m.  Reception to follow in the Hospitality Centre at the Church. Condolences, memories, and photos may be shared and viewed here.

Share Your Memory of
Raffaela
Upload Your Memory View All Memories
Be the first to upload a memory!
Share A Memory
Send Flowers