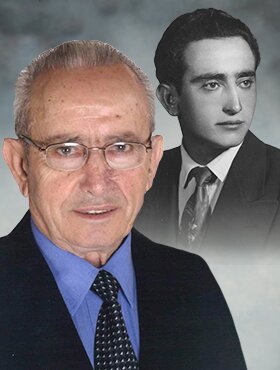 Michele Antonio was born in Bonefro, Campobasso, Italy on February 16, 1930. He immigrated to Montreal, Canada in 1951 where he established himself prior to sending for his fiancée, Santa.  Upon her arrival, they married in Montreal in 1955 where they started their family. They made the move to Calgary in 1959, continuing to grow their family, residing in their Westgate home for the rest of their years together.

Mike lived a long, happy life. He was loved, adored, and deeply respected by his family and friends. If you met him, you instantly became a part of his circle. He was always genuinely happy to see you. Mike had a very strong work ethic and never took short cuts.  He took pride in all of his work and home projects. During his work life as a foreman, he had a hand in constructing many of the buildings in downtown Calgary and later on he was loved by staff, students and their families as a caretaker at St. Andrew’s school. He was happy to retire the same year as his first grandchild was born and enjoyed 28 years of retirement. He was an active, fun Nonno, but always disappeared when it came to diaper duty. Beyond his devotion to family and friends, Mike was passionate about his garden and his winemaking. On his watch, his yard was bountiful and picture perfect.  His winemaking became an annual family event, using his homemade equipment and carefully selected variety of grapes to make his special ‘grape juice’. In his most recent years, even with his memory loss, he maintained his happy demeanor to the end. He showed us how to love life each and everyday.

Funeral Mass will be celebrated at Mary, Mother of the Redeemer Parish (1714 – 14th Avenue N.E., Calgary, AB) on Friday, January 6, 2023, at 11:00 a.m. Graveside Service to follow at Queen's Park Cemetery. Reception to follow in the Hospitality Centre at Mary Mother of the Redeemer upper hall. Condolences, memories, and photos can also be shared and viewed here.

Share Your Memory of
Michele
Upload Your Memory View All Memories
Be the first to upload a memory!
Share A Memory
Send Flowers