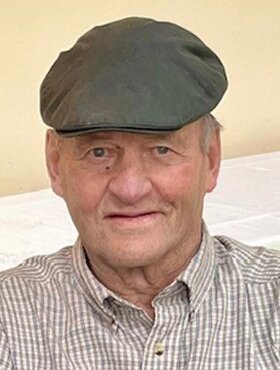 Harry was born on September 14, 1938 in Stanhope, County Durham, England, the second son of Jack and Annie Dobson, of Unthank Farm. He spent his childhood and youth working on the family farm until he moved to London in 1954. Harry enjoyed his time working in London and then joined the Scots Guards for his two-year national service at 18 years of age. He began his trade of iron worker after his military time and ended up travelling the world on various contracts. Some highlights of his work travels were working in Australia, where he met Colleen in 1966, his time in the Middle East and a short contract in New Brunswick in 2000. Harry always wanted to live in Canada, and through his work, the opportunity presented itself in 1975 and he relocated his family there, living first in Calgary and then moving to the boomtown of Fort McMurray. Harry and Colleen moved to Canmore, AB in November 1988 to fulfill their dream of living in the Canadian Rockies. They ran a bed and breakfast there for over 20 years. In 2017, they moved to Mountain View, AB to build a new home in a quieter place and still surrounded by the mountains they loved. Harry and Colleen were able to travel to Australia and New Zealand after his cancer diagnosis and make three trips to his beloved County Durham, England where they stayed for extended times, with the support of all their loving family there.

Harry loved to share stories of his travels and work experiences with everyone he met. He is remembered by family and friends as a determined, kind and caring person, who enjoyed a good laugh.

Harry passed away peacefully on December 31, surrounded by his family after a long battle with chronic leukemia and a shorter battle with PML. He faced his death with the same courage and resiliency with which he faced all obstacles, from climbing mountains to organizing heavy crane lifts.

Harry was predeceased by his parents, Jack and Annie Dobson, his older brother, Emerson Dobson, and his grandson, Stephen Ennis.

Thank you to Dr. Rezabi and Nurse Katie of the Jack Ady Cancer Centre in Lethbridge for their wonderful care these last five years, Dr. Justin Low of Cardston, Alberta for his support, and all the amazing doctors and nursing staff at both the Foothills Hospital and the Southwood Hospice in Calgary, in Harry’s final weeks.

A private family wake and memorial are being held, at Harry’s request. Condolences, memories, and photos can also be shared and viewed here.

Share Your Memory of
Joseph (Harry)
Upload Your Memory View All Memories
Be the first to upload a memory!
Share A Memory
Send Flowers