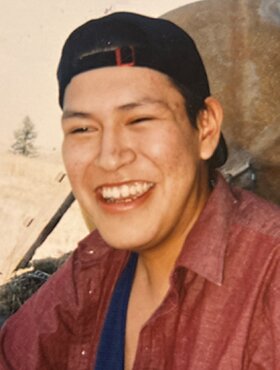 It is with great profound sadness and heavy hearts we announce the peaceful passing of our beloved son, father and brother Lee Cornell Poucette on January 1, 2023, at the age of 44 years surrounded by family.

At a very young age, Lee was keen on reading comic books about Archie. Science and history books were his favourite readings. In grade 5, Lee’s test score was academically high and was advance to the next grade.

As a youth, he would carry a thesaurus and dictionary, and with his cleverness, he would then test his sisters. As a young adult, Lee wrote an essay on his great-grandfather Walking Buffalo that captured the attention of a professor who encouraged him to attend the University of Calgary. Lee’s proficiency in writing and reading led him to study Indigenous history, the Treaties and to identify the impacts of Indian Residential Schools.

Aside from his academics, Lee had a talent as a goalie. He played in Canmore and Morley Minor Hockey, Alberta Treaty Hockey, and Alberta Native Provincials. He was invited to try out for the Cochrane Generals and Regina Pats as well. Throughout Lee’s life he attended numerous goalie camps. As a youth, Lee was very involved in hockey games and helped either as a clock keeper or score keeper for Morley Braves.

He took pride in his passion for reading and writing and attending the University of Calgary. He was also a singer with the Chiniki Lake Jr’s drum group and travelled to pow-wows. Lee was a kind and gentle person who loved his son and daughter and his mother very much.

Share Your Memory of
Lee
Upload Your Memory View All Memories
Be the first to upload a memory!
Share A Memory
Send Flowers