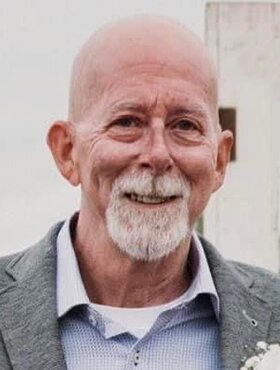 We are deeply saddened to announce the passing of Dennis Thom beloved husband, father and grandfather of Airdrie, AB. He passed away peacefully on Sunday, January 1, 2023, at the age of 61 years young.

Dennis was born in Quesnel, BC on April 14, 1961. He moved to Coquitlam, BC as a young child where he resided with his family. Dennis enjoyed going to visit his grandparents where he worked in their orchard and travelled provinces selling the fruits they had picked. Along the way they would stop at different rivers and streams to relax and take in a little fly fishing.

Dennis graduated from Centennial High in 1979, furthering his education at BCIT, graduating with a degree in Drafting.

He began working for his father's company, where he fell in love with the electrical trade and soon began his apprenticeship, receiving his journeymen papers as a Master Electrician.

Dennis was not only an avid curler but a damn good one. His men’s team won many championships and bonspiels around the lower mainland. They earned a place in the pacific rim which was a prestigious event that brought teams from other countries together to compete.

It was 1985 that Dennis went to a summer bonspiel in Nelson, BC where he met Melanie. Being that Melanie lived in Drumheller, AB they had a long-distance relationship for two years until they married in 1987.  As a newly married couple they lived in an apartment in Coquitlam until 1989 when they learned that a family of two was growing to three. This meant more space was a must, so they purchased their first home in Maple Ridge, BC.

A beautiful baby girl, Kalie, blessed them on January 11, 1990. It wasn’t but a few short years and in 1992 they learned their family was growing to four, so they purchased their second home.

Once again, they were blessed with a second beautiful baby girl, Rhean, on March 17,1993.  As a family many good times and sad times created everlasting memories in the ten years spent in their home. It was in 2002 the decision was made to start a new adventure, although leaving behind very important friendships was difficult, they were excited to embark on the new journey to Airdrie, AB where they bought their third and final home together. In 2006 Dennis and Melanie made the hard decision to continue life as close friends and co parents.

It was in 2003 that Dennis began working at the company he would call home, Propak. Dennis’ strengthens and skills were soon recognized which presented multiple opportunities within Propak. His unwavering leadership and abilities to problem solve shone through in his final position as project manager.

He built many long-lasting friendships within his life and career, leading him to join multiple curling clubs, numerous baseball leagues and let’s not forget his love for golf, late night poker games and garage parties. One of Dennis’ favourites past times was cooking. He would master the perfect recipe to be enjoyed with family and friends and let’s just say it kept them coming back for more. Dennis loved his ink, never ceasing to amaze everyone with his impressive sleeves. After purchasing his dream car in 2017, he travelled to show and shines to share the love of his car with others and became a member of The Dark Horses Mustang Club.

Dennis accomplished much through his life but what made him most proud was being a father. He always took the time to teach his daughters the importance of setting goals and dreaming dreams. He was a father like no other, he believed in them, protected them, strengthened them, and loved them unconditionally. Dennis was thrilled to be a part of watching his daughter's become mothers, it was then that ‘Grandpa’ became his new favourite role.

Dennis can be remembered for his 2 favourite jokes:

A horse walks into a bar. Bartender says: “why the long face?”

What's a fish without an eye?  “fssssshhhhh”.

Anybody reading this who knew Dennis has heard those jokes... More than once. He was well known for his wit and dry sense of humour.

Dennis was predeceased by father George Thom and mother Shirley Thom. As well as both sets of grandparents and uncle Neil Dean.

Funeral Services will be held at McInnis & Holloway (Chapel of the Bells, 2720 Centre St N) on Saturday, January 21, 2023, at 2:00 p.m. Reception to follow in the Hospitality Centre at the Funeral Home. Condolences, memories, and photos may be shared and viewed here.