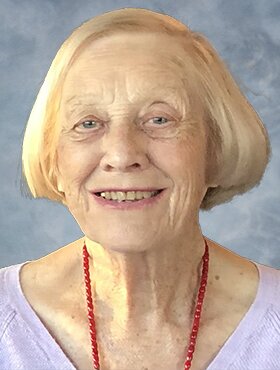 Margaret Mohtadi of Calgary, AB, passed away peacefully on Monday, January 2, 2023, at the age of 94 years.

Margaret was born in Halifax, Yorkshire to Doris and Percy Hirst. She had an amazing and long life. As a teenager during WWII, she was evacuated to the English countryside from her home in Coventry, to avoid the bombing. After the war she attended Kings High School for Girls in Warwick. She was an avid sportswoman who competed in track and field, netball, and field hockey. She then trained at the Children’s Hospital in Birmingham and graduated as a sick children’s nurse and midwife.

Margaret was married to Matt in 1952 and their journey together lasted 68 years. They lived in such varied places as Norway, Trinidad and Tobago, and South Africa, and, since 1967, in their permanent home in Calgary.

Margaret was particularly proud of her children and of course beating Matt in the Glencoe Club Mixed Doubles Tennis Championship twice. She enjoyed playing a weekly game of Bridge and doubles tennis into her 80s. She made many needlepoint works of art to commemorate important occasions such as marriages, and the births of her grand kids. And late in life she gained a passion for backgammon and would play into the late hours with anyone who dared.
Margaret accomplished much in her life, but she will be remembered most for her resilience and her pragmatic approach to life. She was matter of fact, steadfast and the loving glue that held her family together. Sunday evenings were often spent hosting dinner at their home in Alfege Street. Everyone was welcome, the food was always fantastic, whether traditional Persian or English. Her favourite comment was, “You can’t possibly leave that little bit.” She loved listening to music particularly in her waning days and did her best to sing Auld Lang Syne on New Year’s Eve just gone by. We should all take a cup of kindness to her.

Margaret is survived by her three sons Philip (Kathi Durst) and their two sons Matthew and Luke; Nicholas (Anne) and their children Alexander, Geoffrey and Olivia; and Ashley (Laura) and their two daughters Charlotte and Jasmine. Just prior to her passing she met her great-grandchildren, Millie and Wren, from Geoffrey and Victoria. Margaret was predeceased by her husband Matt, her brothers Cecil and Gerald Hirst, and her parents.