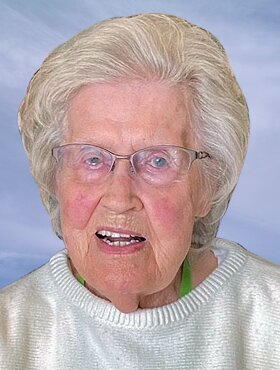 The family of Melvina Hummel is saddened to announce her passing on Tuesday, January 3, 2023, at the age of 95 years.

Melvina was born in Cluny, AB.  Raised on a farm with a large family. Mel’s early years were difficult, but full of worthwhile lessons of family first, hard work, and the love of God and Church.   By necessity, Melvina acquired amazing skills in the kitchen and was a tremendous cook and baker.  She loved nothing more than a huge family meal with far too much food.  She was a very talented singer, whose voice rose throughout Calgary Central SDA Church for years.  But above all, she will be remembered by all as a warm, congenial, giving and forgiving person.  Those touched by her grace will be forever in her debt.

She now rests knowing she was loved by many, and is waiting to see her Savior, Jesus Christ.

A Memorial Service will be held at the Calgary Central SDA Church, (1920 13 Ave. NW, Calgary, AB) on April 7, 2023 at 11:00 a.m. Condolences, memories, and photos can also be shared and viewed here. If friends so desire, in lieu of flowers, memorial tributes may be made directly to ADRA (Humanitarian Agency) at 20 Robert St. W, Newcastle, Ont. L1B 1C6.

The family would like to thank the wonderful care provided to Mel by Sasha Bryce, Vialetta Atrill, and the staff at the Brenda Stafford Foundation Tudor Manor in Okotoks.

Share Your Memory of
Melvina
Upload Your Memory View All Memories
Be the first to upload a memory!
Share A Memory
Send Flowers