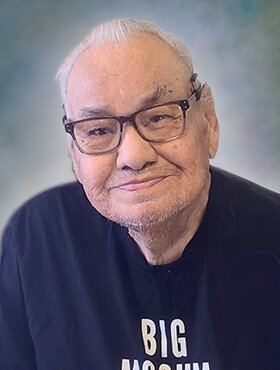 It is with great sadness that the family of Clark (Leon) Bugle announce his passing on Monday, January 2, 2023. Leon Bugle of Beaver Lake, AB passed away after a swift and courageous fight against Cancer, at the age of 80 years old, in Calgary, AB, surrounded by his loved ones.

Leon was born in Lac La Biche, AB to Alice and Samuel Bugle on July 18, 1942. He was fortunate enough to live with his grandparents at a young age and learn traditional learnings before being forced to attend and reside at Charles Camsell Indian Hospital and then Blue Quills Residential School. Once leaving these institutions, Leon ventured on his own and began working at the young age of fourteen. From working in construction, to oil rigs, Leon was always a hard worker. In the spring of 1975, he met the love of his life Shirley. With Shirley, he raised two sons and a daughter. Later on, they welcomed their child Nicole and were very proud of this. He loved his wife, children, grandchildren, and great-grandchildren dearly. His later life consisted of being a vocal member of Beaver Lake and then Elder, who shared stories and was a wonderful resource for the community. He will be deeply missed by friends, family, and the community that knew him.

Leon is survived by the love of his life for nearly 48 years, Shirley Bastien; children: Clement Eaglefeather, Curt Bastien, Tracey Bastien and Nicole (Cesar) Bastien; siblings, Marie Cecilia (Lee) Bugle, Leona (Herman) Omeasoo, Sally-Ann Bugle, and Josephine Jackson; his grandchildren, Aiyana Bastien, Joshua Bastien, Ellie Alcantara, Samantha (Shane) Bastien, Shaylin (Aren) Bastien, Nicolas One Spot, Grayson One Spot and Karmen One Spot; and great-grandchildren, Selena Berdahl, Samuel Berdahl, Sebastian Berdahl and Jeremiah Cortez and also helped with raising Nick Saddleback, Chris Saddleback and Shaylynn Bugle. We are sorry if we missed anyone as we know there are friends and an extensive family that includes numerous cousins, nieces, nephews, grandchildren and great-grandchildren that are not mentioned, but thought of.

The family of Leon wishes to extend sincere thanks to the ICU unit at Rockyview Hospital in Calgary, AB for supporting Leon on his final journey in a respectful way.

Share Your Memory of
Clark (Bugle)
Upload Your Memory View All Memories
Be the first to upload a memory!
Share A Memory
Send Flowers