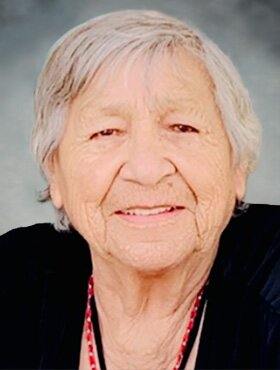 June Aurora Francis (nee Running Rabbit-Duck Chief) passed away surrounded by family on Saturday, January 7, 2023 at the age of 87 years.

June grew up very traditional and was very proud of her Blackfoot culture. She loved attending the Sundance and traveling to many powwows. She attended Olds College and completed her seamstress program and worked at Crowfoot School for several years.

Everyone knew her as “Juney from Cluny” and she was very proud of that because she loved her home.  She was extremely dedicated to the rosary prayer which she prayed every night. June took pride in raising her grandchildren whom she absolutely cherished and spoiled with love.

June loved her family very much and treated everyone with true kindness and love.

June was the last surviving aunt of the Francis family of the Kahkewistahaw First Nations.

The family apologizes for anyone we may have missed.