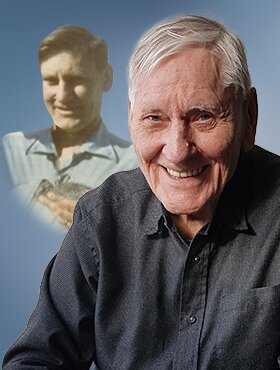 Francis (Frank) Martin of Calgary, AB, passed away on Sunday, January 8, 2023 at the age of 94 years. He passed with family by his side at the Newport Harbour Care Center, where he was a resident.

Frank was born in Rural Municipality of Stanley on June 2, 1928. He grew up and worked on the family farm in Brunkild, MB, until the mid 1950’s. Frank moved to Bowness, AB and married the love of his life, Deanette in 1958. They raised their two sons and daughter in Brentwood NW in Calgary. He worked for Shell Canada for 35 years and retired in 1988. Frank was a long-time member of the “original” 264 Legion in Kensington. He loved to travel and always had a passion for people and good friends. He would visit, socialize and laugh for hours on end.

Frank will be greatly missed by those who knew his warm nature, kind heart and selflessness. He is survived by his daughter Carol Domso (Darryl); sons, Scott (Cyndy) and Joel Martin; grandsons, Wade and Bryce Martin; granddaughters, Nicholette and Jaden Domso, all of Calgary, AB; and special honorary friends, Arleen and Lisa.

If friends so desire, you may make a donation to a charity of your choice.

The family would also like to express a special thank you to all the wonderful and compassionate nurses and healthcare staff at Newport Harbour Care Center for the past five and a half  years.

Share Your Memory of
Francis
Upload Your Memory View All Memories
Be the first to upload a memory!
Share A Memory