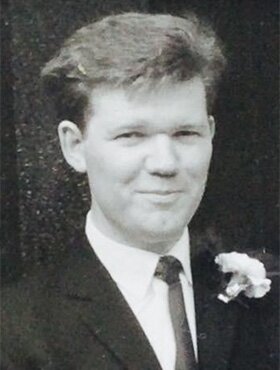 Laurence Reeves beloved husband of Sheila Reeves (nee Williams) of Airdrie, AB passed away on Monday, January 9, 2023 at the age of 82 years.

Laurence was born in Kent, London England on December 9, 1940. He grew up in London England where he met his future wife Sheila at a dance in 1962 and they married on September 4, 1964.

Laurence had a love for drawing and architecture and took draftsman courses before immigrating to Canada with his wife Sheila in 1966. He continued his career as a Draftsman until retirement.

Laurence and Sheila settled in South Surrey, BC until moving to Airdrie, AB in 2021 to be closer to family. Laurence was a member and past President of the Vancouver Orpheus Choir where he spent many years enjoying singing and performing. Laurence also had a great love for soccer. He spent many years coaching his son’s soccer team and playing in a men’s league. He could also be found waking up in the early morning to watch his favourite team Arsenal play.

Laurence accomplished much through his life and was particularly proud of his family. His children, grandchildren and great grandchildren were the highlights of his life.

Laurence was predeceased by his mother Iris Field, his father William Reeves, and a sister Pam Lewis.

A private celebration of Laurence’s life will be held at a later date.  Condolences, memories, and photos may be shared and viewed here.

Share Your Memory of
Laurence
Upload Your Memory View All Memories
Be the first to upload a memory!
Share A Memory
Send Flowers