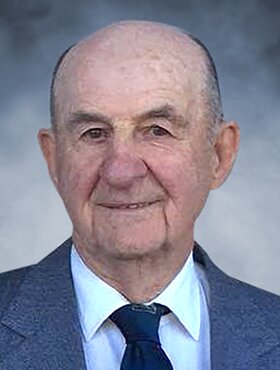 Alexander Szabo, beloved husband of Carol Szabo (nee Coates) of Calgary, AB, passed away on Monday, January 9, 2023, at the age of 86 years.

Alex was born in Hillcrest, AB, on May 30, 1936. He graduated from the East Coulee School, in which led him to providing forty-five years of service in retail in the optical business.

He was a member of the Water Valley Golf Club as well as the Confederation Park Seniors.

Alex accomplished much through his life but was particularly proud of the three holes in one he got while golfing, winning the Confederation Park Seniors Pool Tournament three times, and winning first place in a fishing derby. He enjoyed many hobbies including but not limited to, playing golf, fishing, gardening, wood carving, billiards, and wine making.

Alex’s most memorable vacations were his fishing trips with his sons, his trip to Branson, Missouri at age 74, and his trip to Alaska at age 55.

He will be most remembered for having a very optimistic view on life.

Besides his loving wife, Alex is survived by his three sons and their partners, Howard and Tina; Robert and Elaine; and Douglas and Kam; his four grandchildren, Catherine, Nicholas, Jeffrey, and Harmeet; and his great-grandchild, Sophia.

Alex was predeceased by his brother and sister-in-law, John and Jeanette; sister and brother-in-law, Alice and Norm; and parents John and Margaret Szabo.

Alex’s family would like to extend a special thank you to the Tom Barker Cancer Center, the Kidney Foundation of Canada, Foothills Medical Center Cardiovascular Surgery, as well as South Health Campus.

If friends so desire, memorial tributes may be made directly to Own.Cancer, www.owncancer.ca. or please call the Alberta Cancer Foundation at 1 (866) 412-4222. Condolences, memories, and photos may be shared and viewed here.