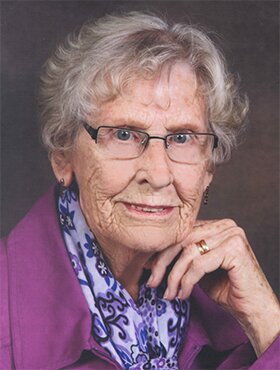 Lovingly missed by her family, Johanna Ball passed away in Calgary on Tuesday, January 10, 2023, after declining health.

Born in Gouda, Netherlands, in 1927, Johanna was rescued in 1945 from a minefield by a young Canadian soldier, Claude “Buster” Ball, who, stationed in the Netherlands during and after liberation, took her as his bride. Following her husband who had returned to Canada, Johanna journeyed on her own to our young country. With equal determination, this girl from a cosmopolitan city began a new life and family in Medicine Hat, moving to Lethbridge three years later.

Most of her life, she and Buster enjoyed living in Sherwood Park and their involvement with the Sherwood Park United Church. As an avid photographer and painter, she loved sharing her skills, paintings, and teaching art at the Sherwood Park rec center. She composed hundreds of stories for her Sunday School students and visited area schools as The Puppet Lady. Her love of camping and sailing was met when she and Buster built a truck camper and a 13-foot sailboat in their basement – and managed to get the boat out and onto Alberta lakes!

“Oma” was an influencer, passing on her love of the visual arts to her children, her five grandchildren, and nine great-grandchildren.

Johanna was predeceased by her husband Claude Joseph “Buster” Ball, her grandson Travis Joseph Ball, parents Johanna and Hendrikus; and brother Theo Veenenbos. She is survived by her son Ron (Beverly) and daughter Carla-Joan Fahlman (Cameron).

In living memory of Johanna Ball, a tree will be planted in the Ann & Sandy Cross Conservation Area by McInnis & Holloway Funeral Homes.

Share Your Memory of
Johanna
Upload Your Memory View All Memories
Be the first to upload a memory!
Share A Memory
Send Flowers