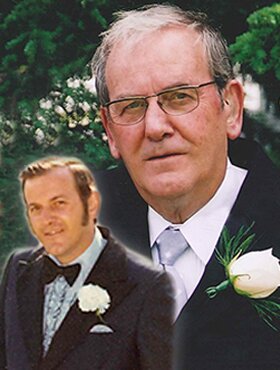 With heavy hearts, the family of James “Jim” Langille shares that he passed away on Wednesday, January 11, 2023, at the age of 81 years.

The third of five children, Jim was born at the family farm in Cumberland County, Nova Scotia to Avery and Irene Langille on October 20, 1941. He attended Oxford Regional School where, according to his principal, he was a “well-liked and very serious young man.” He remained well-liked throughout his life, but his quick wit makes us question how serious he may have been.

Jim worked for the Bank of Nova Scotia for more than 35 years. His early career as an auditor and inspector allowed him to travel to many places, including Jamaica, Guyana, Trinidad and Tobago, Belize, and Puerto Rico. After retiring, he began his second career/hobby with H&R Block as a tax specialist. He was also involved for many years with the Rotary Club of Calgary.

On June 30, 1973, Jim married Leola (nee Harlton) in Boissevain, Manitoba. Their daughter Krista was born in Hamilton, and the family lived in Sherwood Park and Jasper before settling in Calgary in 1978.  Together they enjoyed travelling, camping, annual road trips through the prairies, and weekly Friday dinners with friends. Jim and Leola were married for almost 30 years before she passed away in April 2003.

Jim loved music, photography, National Geographic, and hours upon hours of The Benny Hill Show. He enjoyed home renovations, working on his van, woodworking, creating stained glass ornaments and lamps, and bottling homemade wine. As a lifelong learner and an early adopter of technology, he was likely the only resident to receive regular Amazon deliveries or complain about the Wi-Fi connection at a long-term care facility.

Sundays were always spent sharing a bottle of (thankfully not homemade) wine and dinner with his family. Whether it was steak and lobster or frozen lasagna, he would tell his daughter Krista, “Well, you really outdid yourself,” then attempt to win a game of Trouble with his granddaughter, Kaitlyn.

Although Jim faced many challenges with his health in recent years, he always maintained his sense of humour.  On his transfers between hospitals and care facilities, he said, “at least I got to travel during the pandemic.”

Travel well, Dad; we will miss you.

He is survived by his daughter Krista, son-in-law David, and granddaughter Kaitlyn. He is also survived by a brother Vaughn Langille (Debbie), sisters, Bessie Carpenter and Marlene Cormier; brother-in-law Bill Phillips, sisters-in-law Leone Newton and Evelyn Harlton, nieces and nephews, and friends and family near and far. Jim was predeceased by his wife, Leola Langille, son-in-law Andrew Mawhinney, and sister Patricia Phillips.

“Don't put off till tomorrow what you could do today because if you do it today and you like it, you can do it again tomorrow.”

At Jim’s request, no services will be held. If friends so desire, in lieu of flowers, memorial tributes may be made directly to the Calgary Seniors Resource Society, www.calgaryseniors.org, 3639-26th St NE Calgary, AB T1Y 5E1, or to the charity of the donor’s choice.

The family wishes to extend their gratitude to the staff at AgeCare Midnapore, where Jim has resided since 2020.